After reaching the Championship play-off semi-final in the 2017/18 season, Derby County have elected to take a risk in appointing their new manager, Frank Lampard. The Chelsea legend and former Manchester City player has taken the reigns from Gary Rowett. The novice manager has had no previous experience of management but has played under the world’s best, including Jose Mourinho and Carlo Ancelotti.

Hoping to recreate the glory days of Derby in the 1970s, Lampard’s appointment has brought excitement to the fans and players alike. With the last time in the Premier League ending in relegation with the lowest ever points tally, Derby are pushing to go up once more and re-establish their reputation as one of the English elite.

Last season saw the team finish in sixth and beaten by Fulham in the playoffs as Wolves and Cardiff won automatic promotion. Frank Lampard will be calling on all his playing experience and the coaching abilities of his assistant Jody Morris to ensure that they can go better last year’s achievement.

Frank Lampard’s Derby predominantly set up in a 4-3-3 formation with the wingers moving inside playing like number 10s to make it a 4-3-2-1 formation. This provides a lot of combination play through central areas, where the centre-forwards, wingers, and central midfielders play close to one another, setting up most of their attacks.

The main change seen from last season’s Derby is the energy in their play, with and without the ball. The high pressure off the ball is matched by forward runs made to support and run beyond the players in possession.

Frank Lampard’s Derby look to build up their play from the back, positioning their players in the optimum positions to receive the ball in good spaces, where they can be dangerous for the opposition. Their team is set up to play quickly through the middle with a lot of runners off the ball always giving forward options; a big part of their identity. It allows them to play directly into their attacking players, trying to threaten the goal as many times as possible throughout the game.

During the build-up, their central defenders are close to each other, very uncommon for teams who play from the back. This allows them to offer simple passing options to one another with the defensive midfielder coming close and giving an option for the first forward pass. Their positioning also allows one central defender to advance with the ball, as well as build a structure to prevent a counter attack.

As seen above, in their third of the pitch, Derby create triangles all over. Each player involved in building up will have at least two passing options to advance the ball further up the pitch.

During the first phase of the build-up, Derby’s full-backs occupy low and wide positions. This set-up allows simple passes at the back and prevents congestion in midfield, stretching the play vertically while inviting the opposition onto them.

With both wingers moving inside and one forward run made from a central midfielder, the player on the ball will have five passing options. Derby’s priority is to always play on the inside, where they have their most creative players, but always have a secondary option out wide to the full-backs if the opposition is blocking the space inside, as seen in the picture above.

Their first option is to play on the inside. Their wingers are clever in the way they pick up positions in the half-spaces, and are very difficult for opponents to mark because of their ability to interchange and switch positions.

A very important aspect of their play, Derby rely on the pace of Jack Marriot. He is used to attacking the space when Derby approach the final third of the pitch. The way he plays forces opposing defences back, denying them the comfort to push up comfortably. This allows horizontal lanes – between the opposition defence and midfield – for midfield runners to move into, making runs into the penalty area and giving options for cutbacks and crosses.

This season, Derby play in a structure where they defend in a compact shape, having all their players congest the central areas. This forces opponents to play on the outside, which makes it easier for Derby to press and push them into positions further away from goal. As the ball moves across, their narrow shape shifts to keep their opponents playing on the outside. This is a seen in the image below

Frank Lampard instructs his team to press from the front to recover the ball in high positions and start the attack from as near a position from the goal as possible. Derby have a wealth of players that have the energy that can sustain the press, as well as others who are clever in attacking the space left by opponents.

Their compact structure means that both their wingers and full-backs are tucked in, leaving limited space for opponents to beat the press. A tactic that is unique to Lampard’s Derby is the fact that they always have pressure on the ball in all areas of the pitch, especially the middle third. They try to hassle the oppositions’ players and force mistakes, resulting in ball recovery.

As shown above, opponents find it very difficult to make forward passes, resulting in passing back towards their own goal. This is a pressing trigger for Derby as they push up their lines and restart the press from the front.

If they are forced to defend deep in their defensive third, Derby defend in a 4-4-2. One of the central midfielders shifts across to defend the opposing full-back, with the opposite winger tucking inside to make it four in midfield. This leaves the other winger and the centre-forward in a position where they are ready to counter-attack.

The way Lampard sets his team up in transition is by playing in a 4-4-2, leaving enough numbers to support the counter-attack. After recovering the ball in any area of the pitch, Derby look to play the first pass into their ball carriers. These are players who can beat opposition defenders and uncover spaces to either drive into or play a pass to the centre-forward.

Derby’s players are well drilled in exploding from their defensive shape and making runs off the ball to support the attack. This comes from their central midfielders and their wingers, who can assess the space and run into it, providing options for the players in position. Their centre-forward, often Jack Marriot, is always ready to run in behind. He moves across the opponents’ last line, threatening the space in behind and utilising his pace to gain an advantage over his opponents.

Lampard instructs his players to counter-press aggressively as soon as his team lose possession of the ball. His team do this by making movements towards the ball, closing the space around the opposition player who is in possession and trying to win the ball back as quickly as possible. Teams who play against Derby find it difficult to counter-attack against them as their dynamic players have quick reactions and have the capacity to exert sustained pressure after the loss of the ball. 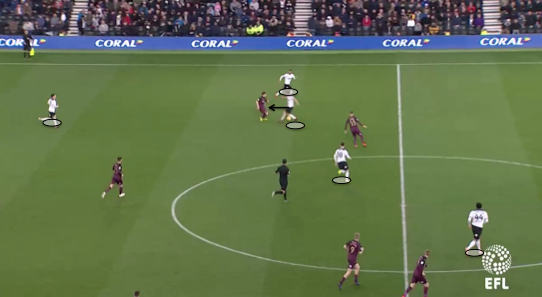 Another difficulty opponents find when trying to counter-attack Derby is their solid structure behind the ball. Derby keep at least four players behind the ball at all times when they are on the attack. This allows them to manage the risk of losing possession, as seen in the picture below. This set-up minimises the possibility of an opponent counter-attacking, keeping them secure and allowing the attacking players to focus on their attacking duties.

Player to look out for under Lampard

Lampard’s recruitment focused on younger players that will fit into his style of dynamic football, being able to sustain the energy exerted throughout a long Championship season. One of the main talents Lampard has brought to Derby is Chelsea youngster Mason Mount.

Mason Mount is a player that has been at Chelsea since a young age and is in his second loan spell away from the club. He plays in the number eight position, similar to the role Lampard  occupied throughout his career. The impact of Derby’s manager is incredible for everyone to see. The number of forward Mason Mount makes throughout the game is characterised by Lampard’s way of playing as a player.

This season, Mount has had more touches in the box than any other central midfielder in the league. The positions he puts himself in give him the possibility of getting on the end of dangerous attacks. He has reaped the benefits of Lampard’s coaching by scoring six goals so far.

The image shows the finishing position Mason Mount has put himself in, starting his run from central midfield. His willingness to make the run and put himself in a place where he can score is reminiscent of his manager’s playing career. If he is able to continue in this vein, we will undoubtedly see another great English goalscoring midfielder.

Frank Lampard is evidently a very sound teacher and capable of implementing an attractive and dominant style of play. His main job at Derby County is to build a team that will excite the fans and try to push for a lucrative promotion. His impact has already been seen and heard about all over the world, with a lot of people keeping a keen eye on his progress. He could be a Premier League manager two years into his career. If cementing his legendary status as a player wasn’t enough, now he is set to embark on another fantastic career. With his personality and his attractive style of play, he will be hoping to sustain Derby’s form in the second half of the season.

Birmingham City vs Huddersfield Town Preview: 3 things to watch out...

‘Premier League class’- How 22-year-old became one of the Championship’s best...

Match Stats: Draw for Mansfield away to Colchester