Tactical match analysis of the Saturday evening kick-off in the Championship as Hull City stunned Swansea City at the KCOM Stadium.

In this analysis, we’ll look in depth at both side’s contrasting styles and how Hull City improved in the second half to come back and win from a 1-0 deficit.

For the fourth time this season, Swansea City threw away the lead and questions will be asked again regarding their game-management.

The final half-an-hour was a completely different affair however as Hull City gained control and played to their counter-attacking strengths. Unlike Swansea, Hull were clinical when chances arrived and this proved to be the key difference.

The teams and setup

Both teams lined up in their expected shapes, Hull City in a 4-4-1-1 with Swansea City adopting a 4-2-3-1 system. Swansea’s wingers often cut inside to support Wilfried Bony and Barrie McKay and relied on the full-backs for width. 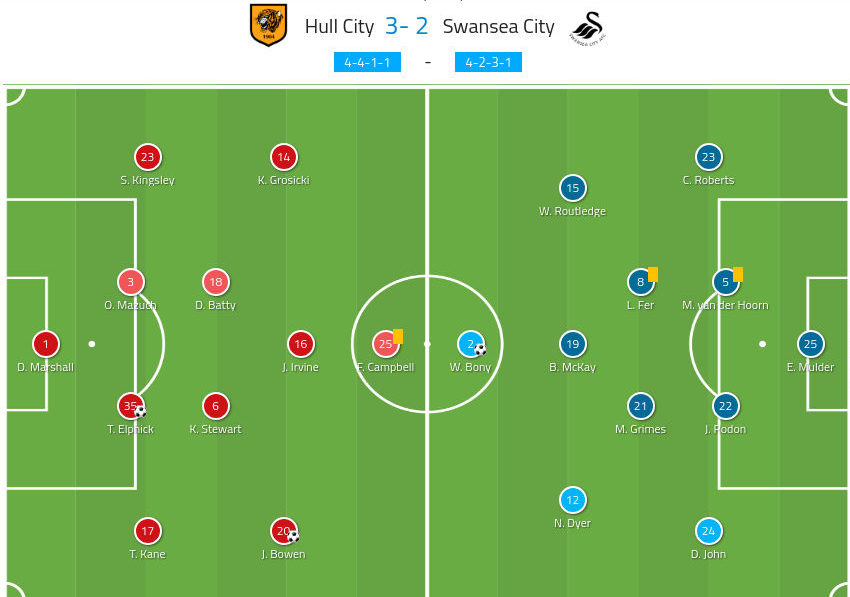 Both sides adopted something of a medium press. Not an intense Leeds-like press nor a sit-back and invite pressure press – something in between.

Hull’s press consisted of Campbell and Irvine pushing up against Swansea’s two centre-backs but this caused few problems and little-to-no forced errors in possession from deep. 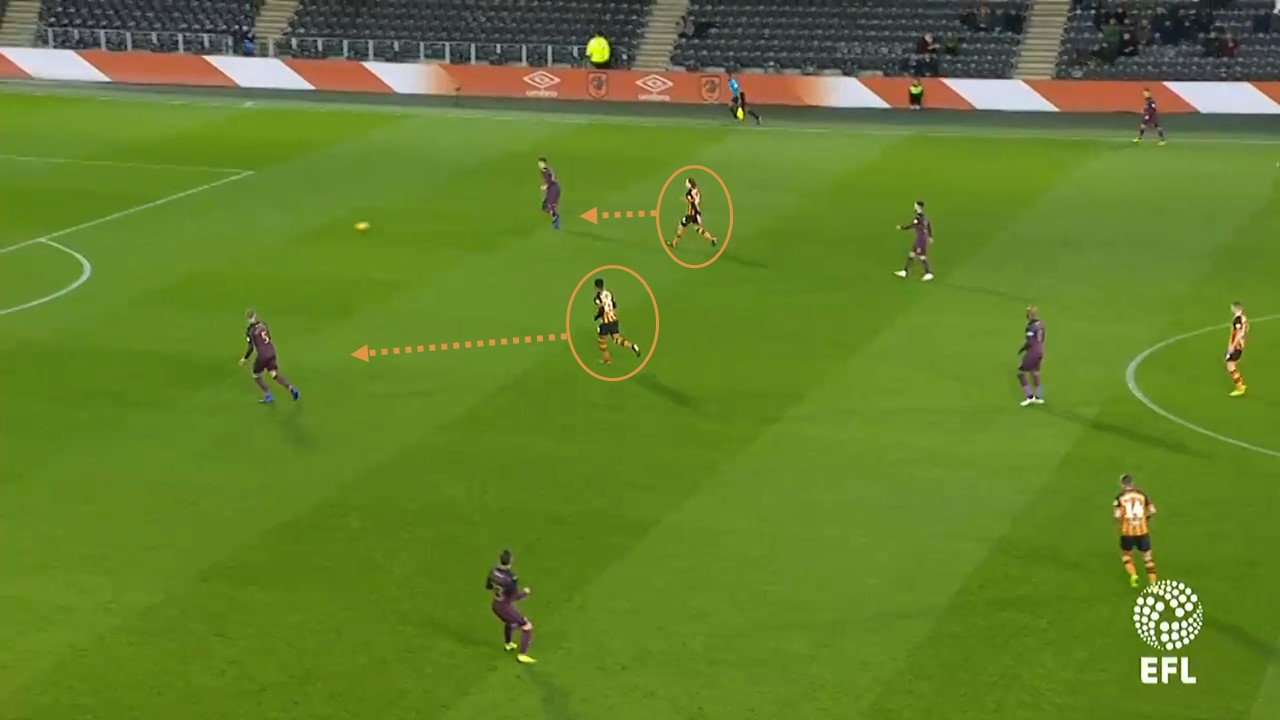 By contrast, Swansea’s press saw McKay and Dyer pressing either side of Wilfried Bony. There were moments when Hull made passes amongst their backline, hoping to attract the press to make use of the space ahead. Swansea didn’t take the bait. 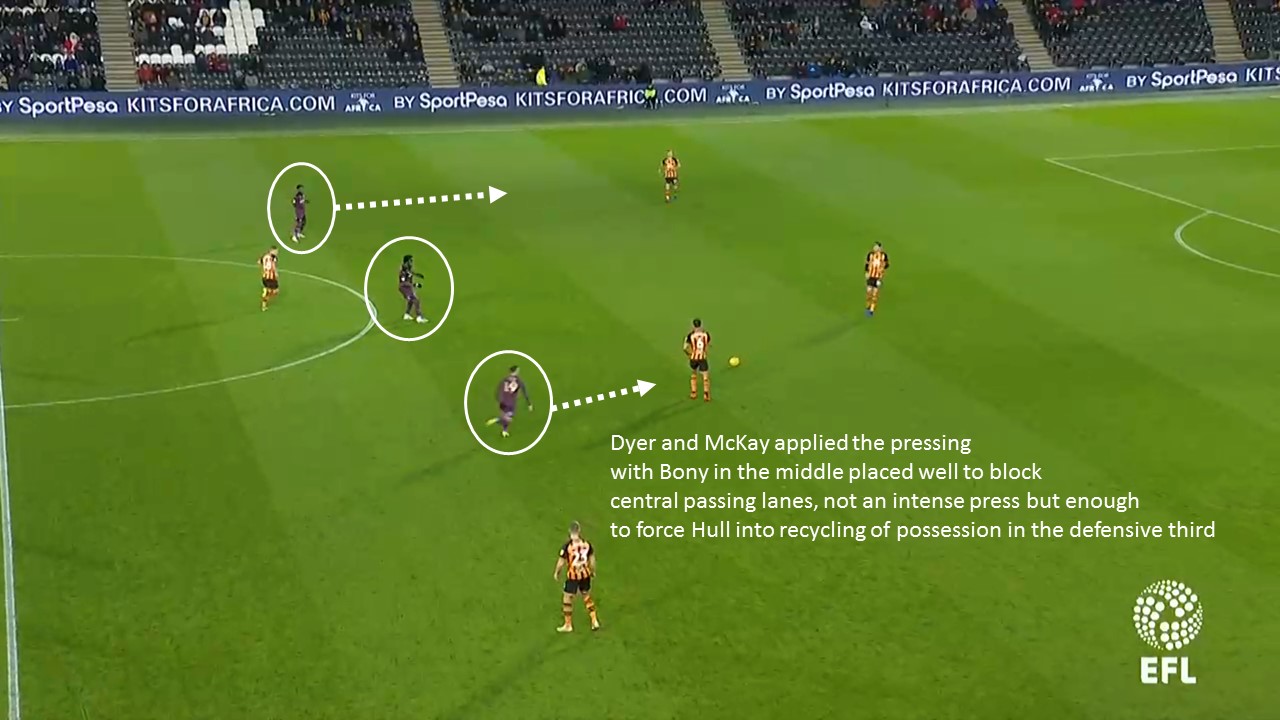 Before kick-off, Hull manager Nigel Adkins said that he expected Swansea to have plenty of possession and that his side needed to be compact to contain the visitors, but that wasn’t the case in the first half.

That would have been ideal for Adkins and his counter-attacking style, soak up the pressure, invite Swansea into their half, win balls on the edge of the final third and quickly feed the wide-channel runners of Grosicki and Bowen.

Graham Potter’s side, however, weren’t exactly overly patient with their attacking build-up either. Not as direct as Hull, but they looked to get the ball into the feet of the central attackers whenever possible with quick, vertical passes usually from centre-back van der Hoorn.

Swansea City were in front early as striker Wilfried Bony netted his first goal of the season just three minutes into his first league start in a year.

After both sides lost possession in quick succession in the middle third, Swansea City were able to make full use of the space left behind as Hull committed players forward.

Wayne Routledge makes a diagonal run, taking a defender with him and leaving space free as Bony approaches the key attacking zone 14. Stephen Kingsley is the spare defender for Hull but he doesn’t apply pressure on the ball as Bony fires home.

Swansea have been flexible in the Championship this season under Graham Potter. There’s fluidity in attack and players will swap positions regularly.

This requires players to be flexible in different positions and roles. Full-backs will sometimes be required to make inside runs while the number 10 and wingers might swap roles.

As mentioned previously in this tactical analysis, Swansea City aimed to get quick balls into the feet of the central attackers. Centre-back Mike van der Hoorn was usually in a right-back position looking to make these passes.

Hull City allowed Swansea to make these passes happen far too easily and as a result, they were able to get in behind Hull’s midfield.

A counter-attacking side, there was plenty of space in the middle of the pitch for Hull to make use of – if only they could simply intercept these passes. 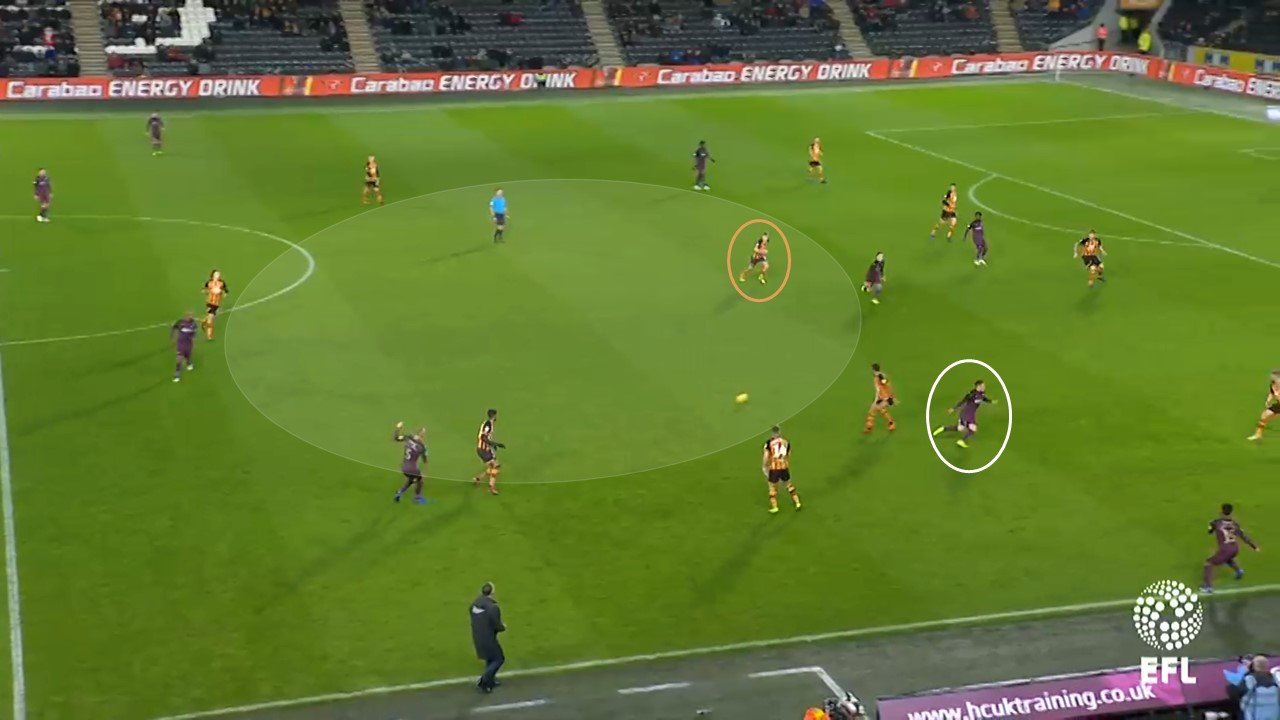 Hull begin to play to their counter-attacking strengths

After 30 minutes of control from Swansea, Hull City suddenly came to life and ended the half strongly. A missed penalty didn’t affect them as they began to play to their strengths.

To begin with, Hull couldn’t quite get these long passes right – playing them behind the runners as opposed to in the space in front of them.

With 15-20 minutes remaining in the first half, it was established that these long diagonals from deep were Hull’s main threat. 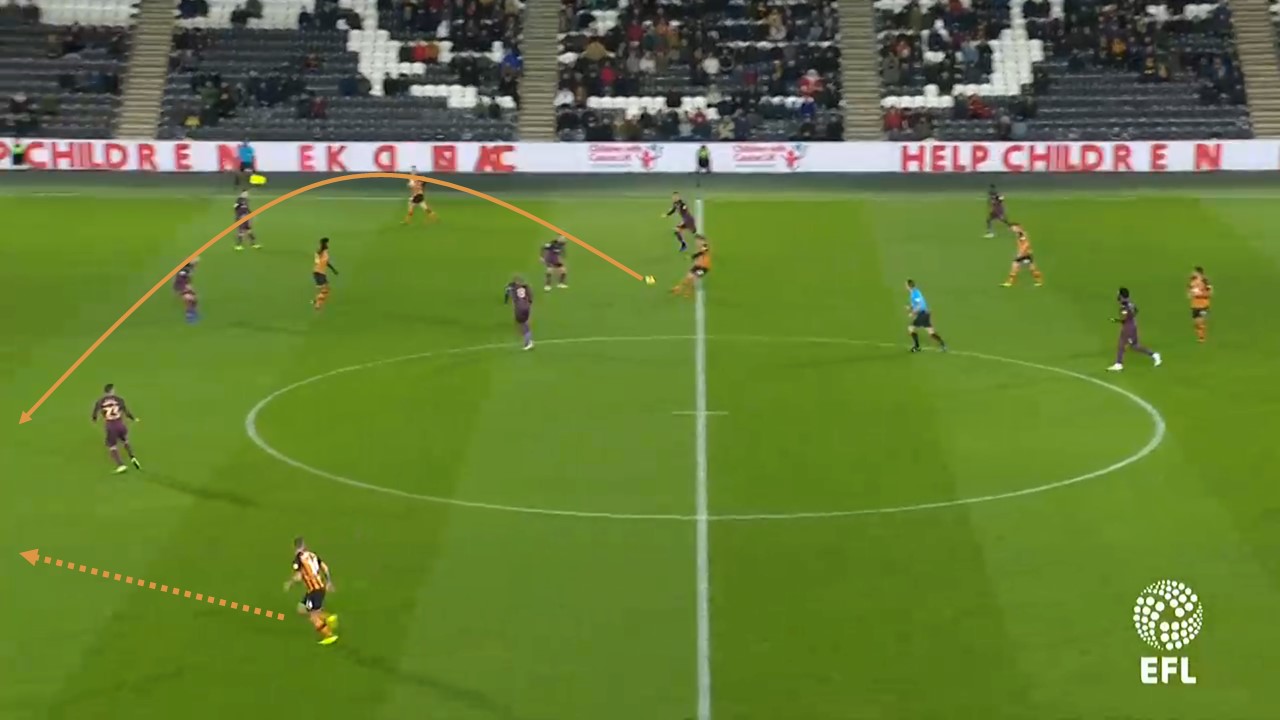 Hull begin to get these passes right, causing problems down the left channel / half space. Their best chance of the half came after a move like this but nobody could connect with Grosicky’s testing cross.

Swansea committed in the attack

Swansea City were committed in attack with a front four. McKay circled below, in the number ten role, was often alongside the striker Bony rather than dropping into the space behind him. 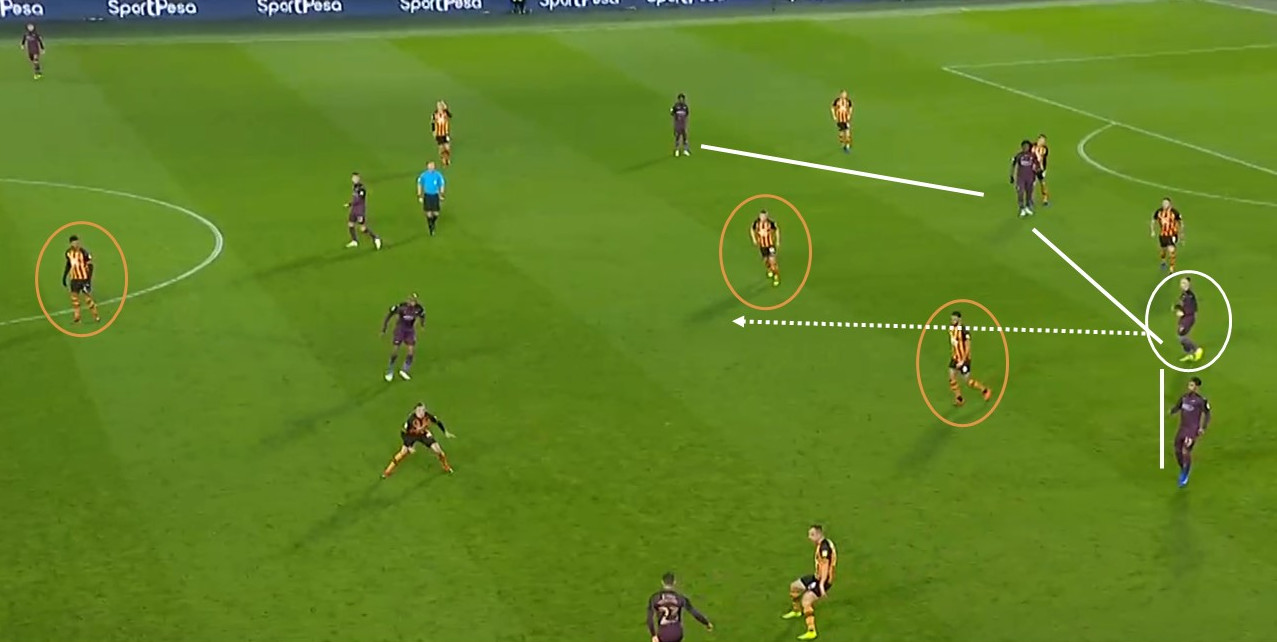 Hull’s improvement in midfield was key to their comeback in the second half. In the first 45, they allowed Swansea City to make forward passes too easily. The changes allowed them to win possession in key areas to start quick counters.

Hull’s equaliser comes from Grosicky picking the ball in a deep position – about midway in his own half. He’s allowed to sprint into the attacking third with a lack of pressure from Swansea. 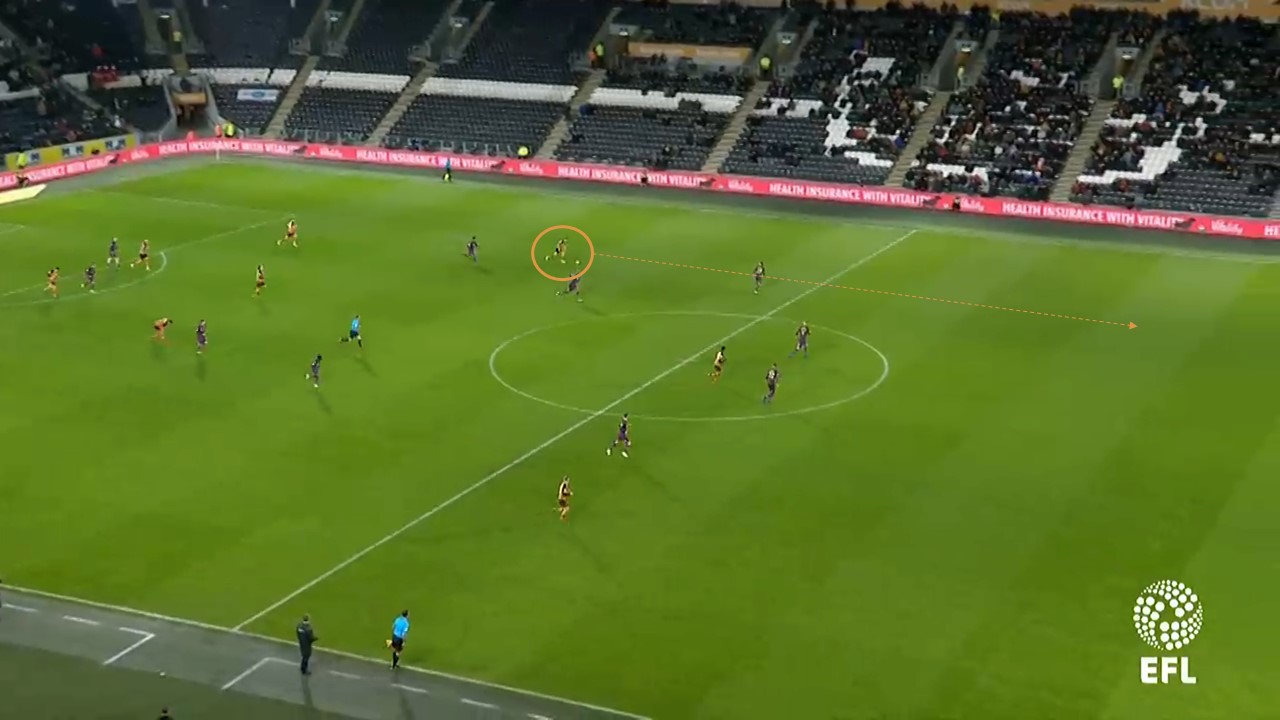 Campbell’s low cross from the left isn’t blocked by either Rodon, van der Hoorn or Grimes and Bowen taps home to equalise. 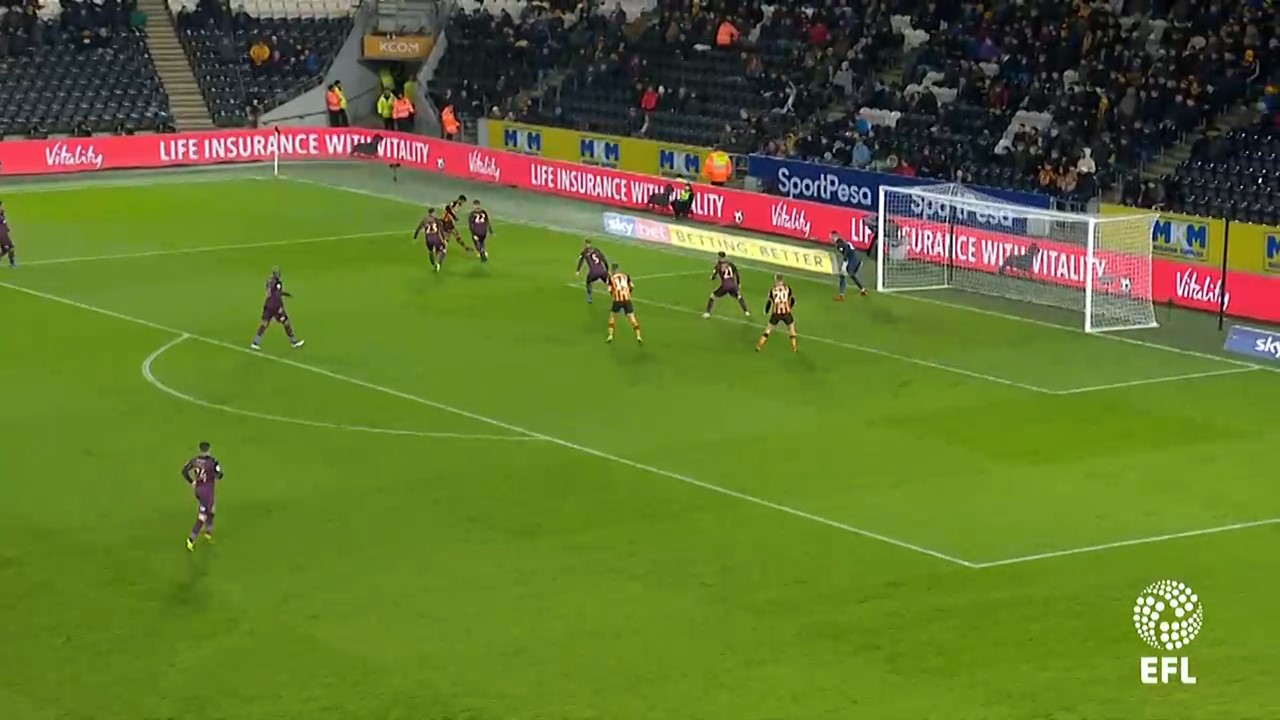 West Brom exposed Swansea’s corner defensive vulnerability, scoring twice for a comeback win at the Liberty Stadium. Hull City did the same here, scoring a similar back post headed goal that looped over the goalkeeper.

The disappointing aspect for Graham Potter is the repeated nature of the goal. Not only that, but his Swansea side left Tommy Elphick unmarked at another corner moments before his goal. To add to that frustration, captain Leroy Fer looks behind and sees Elphick unmarked but doesn’t react. 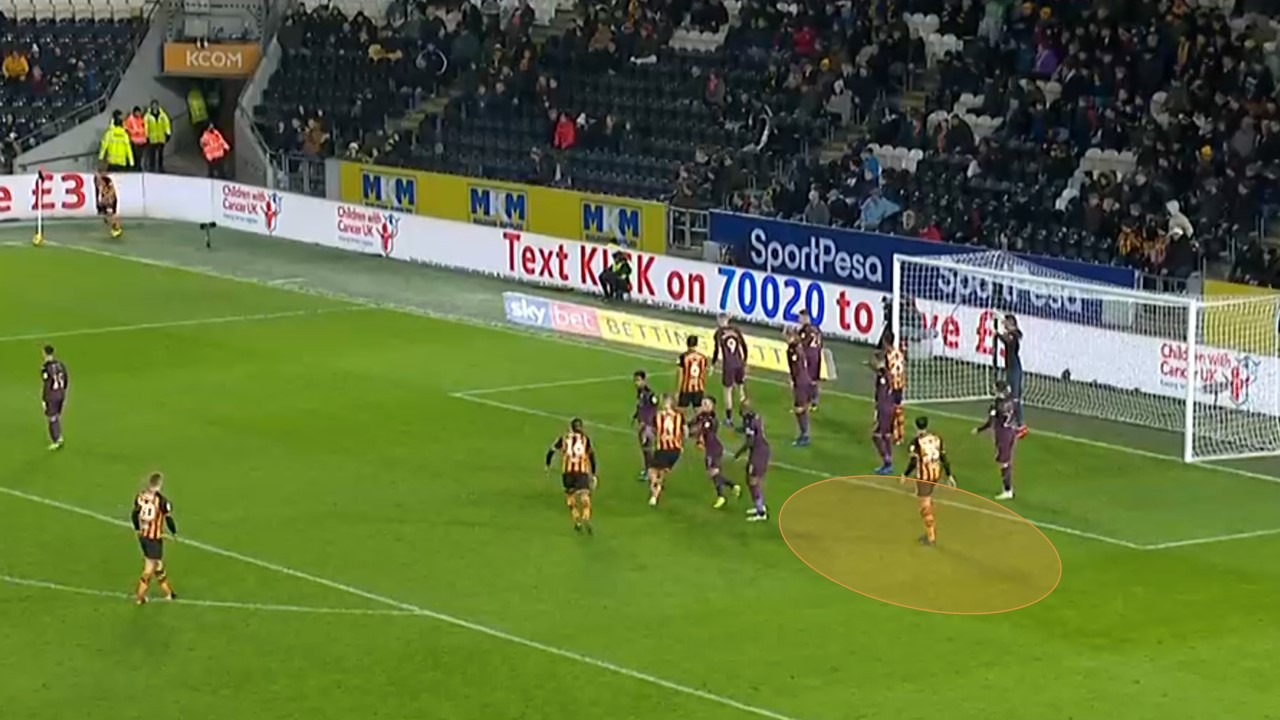 Swansea City later fixed this problem at corners, albeit after the goal (below).

Hull get their two-goal cushion

Bowen showed his threat before his strike and third goal for Hull.

Here he forces a good tipped save from Erwin Mulder. The chance came from a long ball for Bowen to chase down the right channel, an error from Joe Rodon allowed the Hull man to cut inside on his left.

Later, after a corner is cleared and the ball is picked up by Bowen, he’s allowed space to cut inside on his left once again.

A trio of Swansea players are near him but a challenge never comes and Bowen shows his quality with an excellent finish. Hull also had three free players running in at the back post in anticipation of a cross. 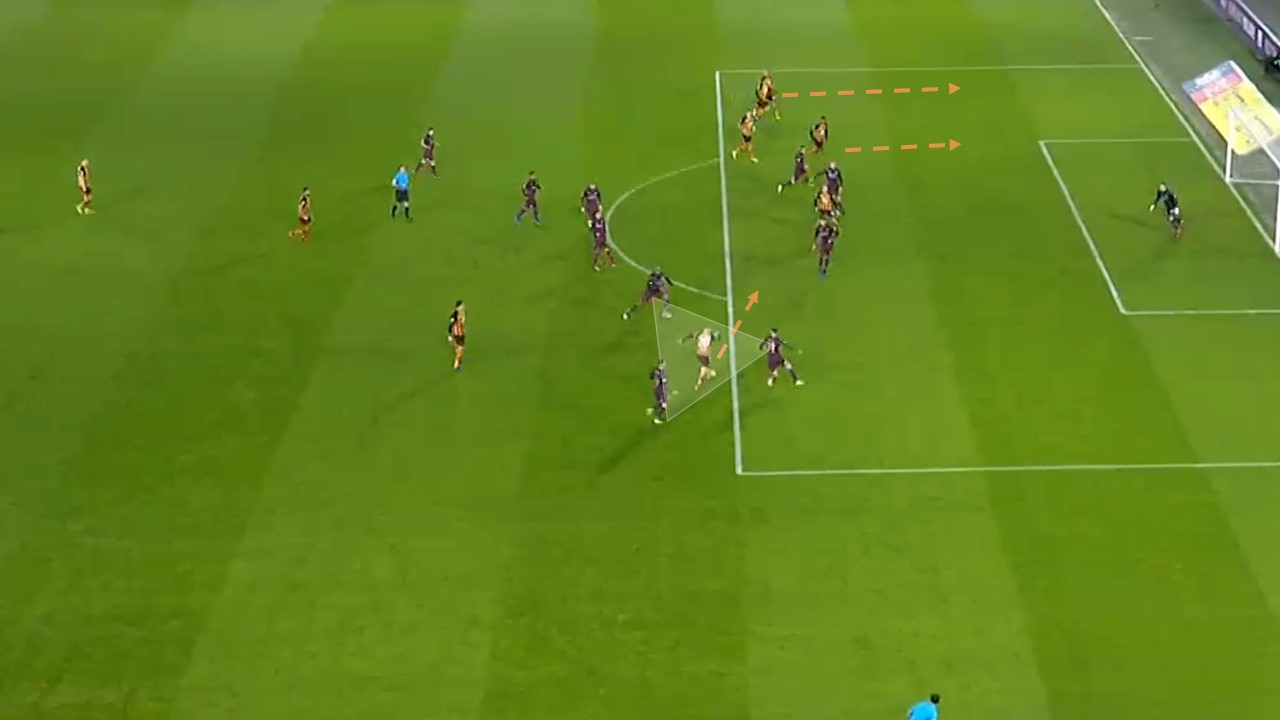 Chasing a two-goal deficit, Swansea manager Graham Potter went for broke with ten minutes to play. He pushed defender Mike van der Hoorn to join the attacks and dropped McKay back to cover.

Substitute Bersant Celina’s goal proved to be a late consolation after an excellent solo run from deep. 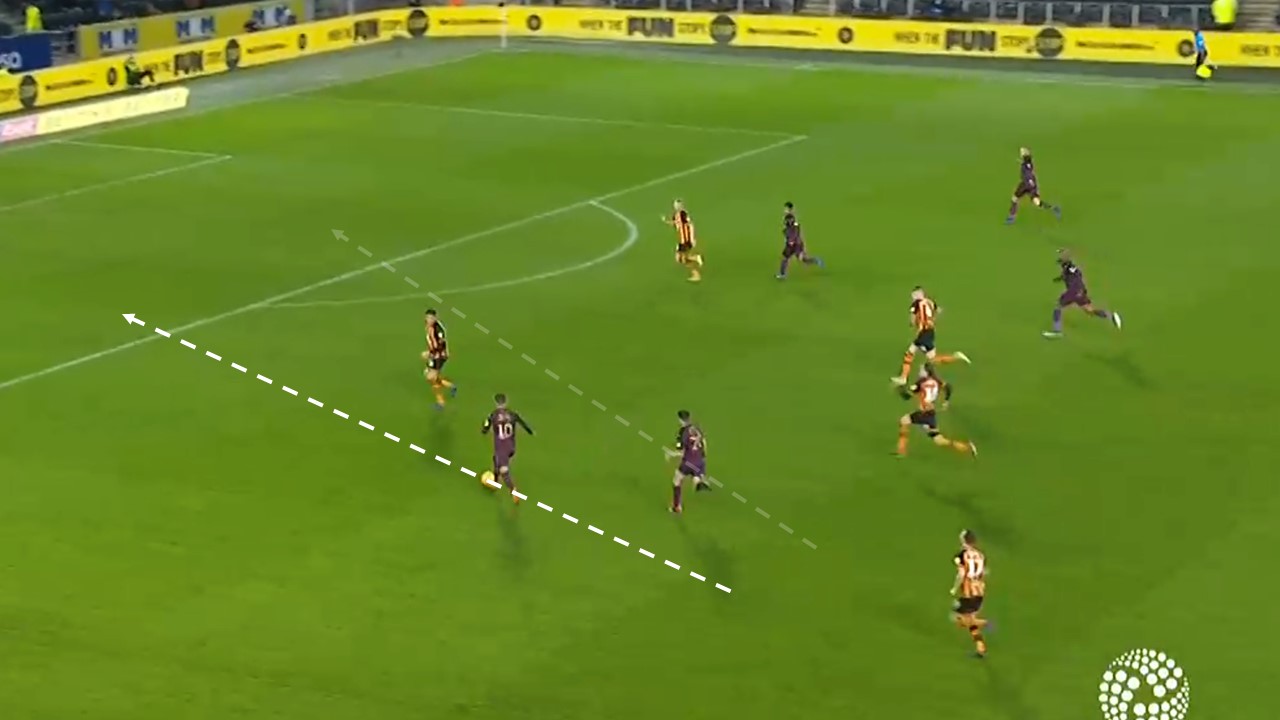 If you love tactical analysis, then you’ll love the digital magazines from totalfootballanalysis.com – a guaranteed 100+ pages of pure tactical analysis covering topics from the Premier League, Serie A, La Liga, Bundesliga and many, many more. Get your copy of the FIRST of two December issues for just £4.99 here or preorder the SECOND of the December issues with an annual membership right here.

Data Analysis: A draw for Ecuador in their home game against...

Who Are the Promotion Favourites for the Championship This Season?

The EFL Stats Gallery: Why did Swansea City lose? Who was...