There are plenty of reasons why the EFL Championship thriller between Aston Villa and Leeds United is an accurate reflection of the latter’s fascinating 2018/19 campaign under Marcelo Bielsa so far in one game. They conceded early on, only to come back during the course of the game in dramatic fashion. This tactical analysis will explore how they manage this.

High-octane pressing for 90 minutes and dynamic interchanging movement from all players have become hallmarks of this Leeds side. Contesting for promotion and a top spot in the table aside, they might very well be establishing a new brand of attacking football in the English second tier.

In Aston Villa, Leeds faced a stiff opponent. Up front, the hosts boasted the attacking power of Yannick Bolasie, Conor Hourihane, Jonathan Kodjia and Chelsea loanee Tammy Abraham. Villa loomed mightily over Leeds as the technically superior side in comparison. This was evident from their first goal coming within five minutes of kick-off and the second around 10 minutes later.

Villa lined up in a 4-1-4-1 against Leeds’ 4-2-3-1, derived from the 4-1-4-1 they have been employing all season. The central midfielders took turns to drop deep and support the holding midfielder.

Leeds have faced defensive problems since the start of the season, almost as a tactical drawback of their attacking style. This is evidenced by the number of times they have started games by trailing early on. One of the key reasons for this is the way they build-up from the back.

Pontus Jansson pairs up with Kalvin Phillips, originally a central midfielder, as the central defensive duo. Bielsa has both his full-backs push high and wide in attack. Adam Forshaw, the defensive midfielder, slots in between Pontus Jansson and Phillips. Together, the three play a vital role in distribution and build-up play.

When possession is lost, Leeds engage in immediate counter-press to win the ball. This often comes at the cost of breaking their defensive line, leaving huge spaces for quick forwards to burst in. This was seen from the first minute and throughout the game. Villa’s first goal was a perfect example of how big a handicap the defensive line proves to be for Leeds. 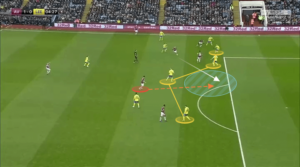 The two centre-halves that are required to cover the space left by the full-backs that push high get split wide apart. As a result, Forshaw is left to deal with the space in front of the penalty box. 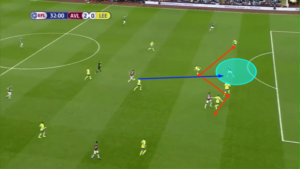 Although Forshaw usually displays a robust performance in midfield, he made a few blunders in this game. One of them resulted in Leeds conceding the second goal in the 17th minute. Hourihane was left unmarked with enough time to curl a shot into the bottom corner past Leeds keeper Bailey Peacock-Farrell.

Leeds, however, dominated the game in the midfield with their aggressive pressing. Bielsa ensured the technical players like Abraham and Kodija were given no space to dribble by having his players close in from all sides and immediately regain possession. 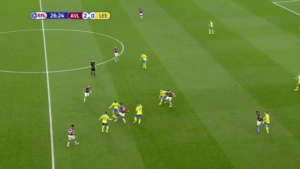 Kemar Roofe covered vast areas with his commendable defensive work rate, consistently applying pressure on Villa keeper Orjan Nyland. He also rotated roles with Pablo Hernandez and Mateusz Klich by covering deep defensively when they pressed up high. During build-up, Klich and Hernandez would take turns dropping deep to collect the short pass from Forshaw if the wide wingers were not an easy option.

One of the key strengths of this Leeds attack was significant team width. Wingers Egzijan Alioski and Jack Harrison, and Jack Clarke during the second half, moved up the pitch hugging the touchline. This pinned back the Villa full-backs and gave the midfielders a range of options to penetrate the backline. 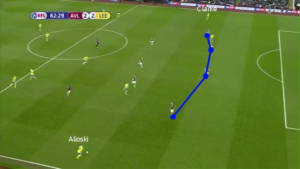 The winger, fullback and central midfielder formed triangles with fluid, interchanging positions. This caused huge problems on the flanks. When Alioski stayed wide, Luke Ayling would underlap through the half space. When Alioski cut in, Ayling would overlap. 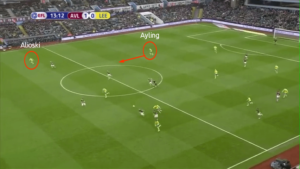 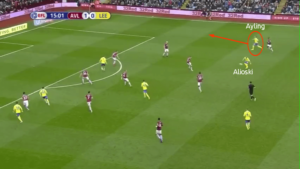 Hernandez and Klich would take turns to offer cover, forming the third vertex to the triangle on either side. 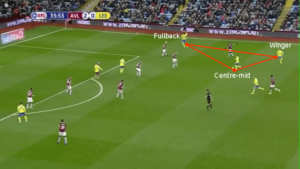 Roofe was able to exploit this team width with lots of dynamic movement between the center halves. He would often come short, encouraging a give-and-go for the wingers to stretch the play out wide.

Although Leeds enjoyed the bigger share of chances in the first half, they still trailed 2-0 at the break. Bielsa entrusted 18-year-old Clarke to offer surprise on the left wing by replacing Manchester City loanee Harrison at half-time. Clarke’s skill with his feet paid off early by netting Leeds’ opener, his first professional goal, before the hour mark. Jansson then equalized a few minutes later by capitalizing on some poor Villa man-marking in the box at a corner.

Leeds continued to dominate in a similar fashion. With minutes remaining, the effect of Bielsa’s rigorous pre-season started to manifest itself and take a toll on Aston Villa. The winner by Roofe was perhaps a consequence of what Leeds were trying throughout the game with their width.

With Leeds in possession just in front of their penalty box, Klich quickly looked to organise a counter with Alioski hastily drifting out wide to receive the pass. On the other wing, Roofe and Clarke burst forward, causing Villa’s Egyptian full-back Ahmed El Mohamady to scramble. 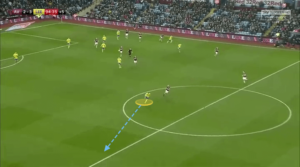 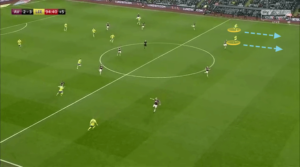 A floating cross from Alioski from his stronger left foot didn’t manage to find either Roofe or Clarke. It did, however, force an erroneous header from an exhausted El Mohamady into the path of Roofe. He did not hesitate to smash it home in the 95th minute, sealing Leeds’ 3-2 victory in nail-biting fashion. 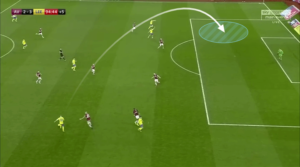 We’re only halfway through the Championship season. Whether Bielsa can manage to keep up the energy levels till summer would be interesting to observe. His previous teams have all encountered burnout eventually. Nevertheless, his philosophy of courageous positional play in all games so far has captivated viewers around the world. It would be a sight to see him restore this club to its historic glory.

Under the microscope: Swansea’s reliance on Joel Piroe for goals this...

Under the microscope: Analysing Danny Ward’s performances at Huddersfield Town

The EFL Stats Gallery: Who had the better xG between Cheltenham...