This post initially featured on our network website which covers players, matches, coaches and more in totalfootballanalysis.com.

Norwich welcomed Sheffield United to Carrow Road for an entertaining 2-2 draw between two of the Championship’s top sides. Billy Sharp was on target twice for the Blades as they came back from a losing position on two occasions, pegged back by goals from Onel Hernandez and Teemu Pukki.

Both Pukki and Sharp started the day as joint second highest scorers in the Championship with 16 goals apiece. Sharp raised his tally to 18 while Pukki took his to 17.

While both managers seemed to agree in their post-match interviews that the points shared were “fair” and “hard-earned”, ground has been lost on league leaders Leeds United. Their victory over Rotherham saw them move three points ahead of Norwich in second, and six points ahead of Sheffield United who occupy third.

Both teams went with their regular formations for Saturday’s match. Norwich deployed their 4-2-3-1 formation that has proved to be incredibly effective. They implemented their attractive possession-based style throughout the match, with their opening goal coming off the back of a lovely passing move.

German midfielder Tom Trybull kept his place in the starting line up after opening his account for the season last week against Birmingham. He put in another impressive performance in the centre of the park completing 89% of his passes and making five tackles. The Canaries were, however, still without key defender Timm Klose, who has been a loss to them over the last few weeks.

United went with their fascinating 3-4-1-2 system which has served them so well all season. As we will examine in further detail, the wide centre-backs, Chris Basham and Jack O’Connell, play a big part in the build-up play. They either push on to add extra numbers in midfielder or rove deep into the opposition half to attack down the flanks.

The Blades also had a new addition to their squad in the starting line up in the form of Gary Madine on loan from Cardiff City. The 6”4′ centre forward had a good debut for his new side, offering an extra physical presence up front which United haven’t quite had this season. He managed to win 11 aerial duals throughout the match. The next highest amount won was three.

Chris Wilder has made excellent use of an unorthodox iteration of the back-three system at his hometown club Sheffield United. A key feature of the formation has been the unexpected bombing forward of centre-backs Chris Basham and Jack O’Connell, who operate on the right and left of the back three respectively.

This provides United with two attacking advantages. Firstly, it can help them get an extra man in midfield, aiding greatly in build-up play. Below, Basham can be seen stepping up into midfield to give his team an extra option. 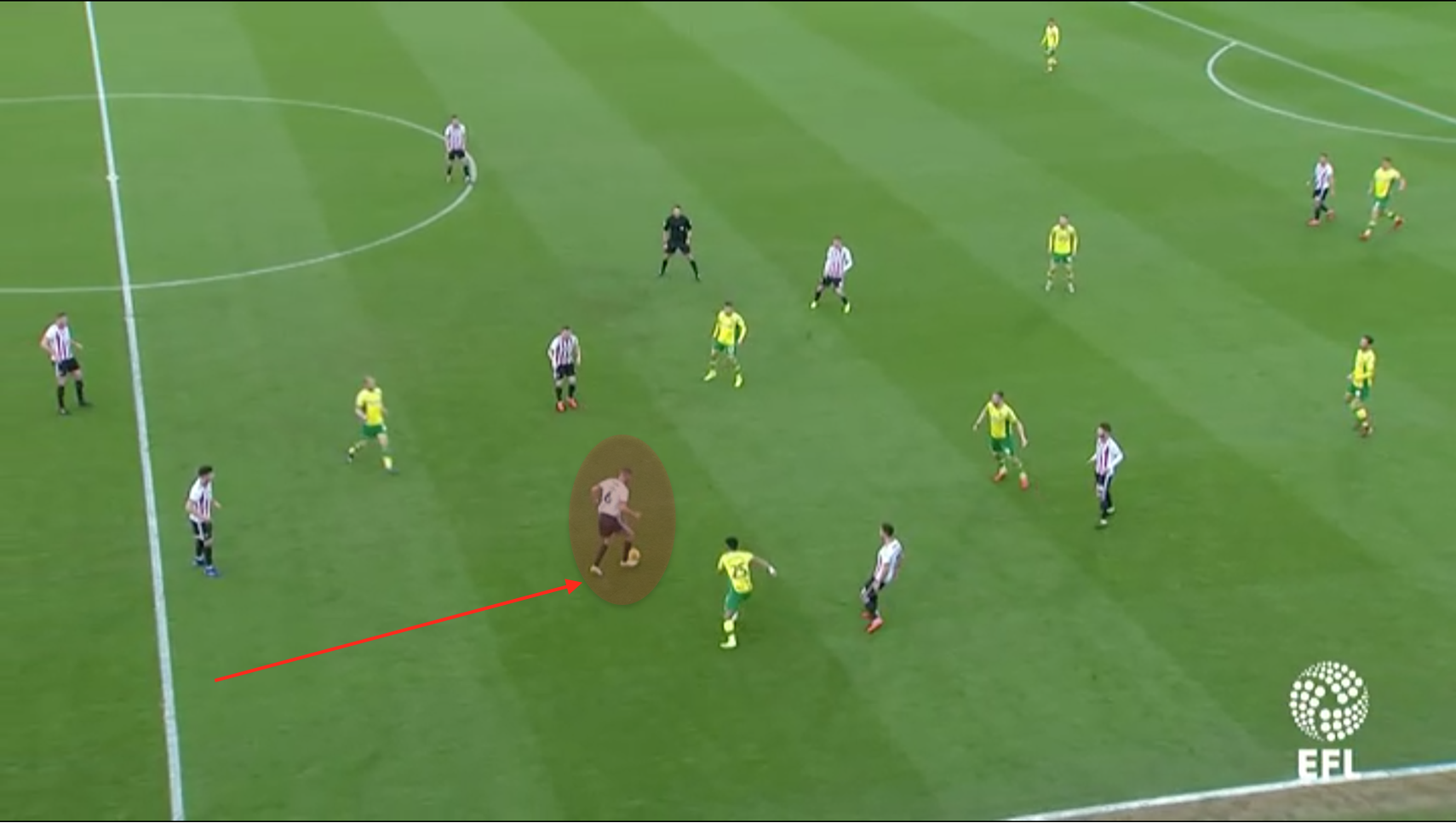 The two centre-backs can also be seen making bursting runs into the opposition half as far as the penalty area and byline. This can cause a lot of disruption to opposition defences, simply because you do not expect to see an opposition centre-back charging towards your own penalty area. Basham, again, can be seen exemplifying this action below. 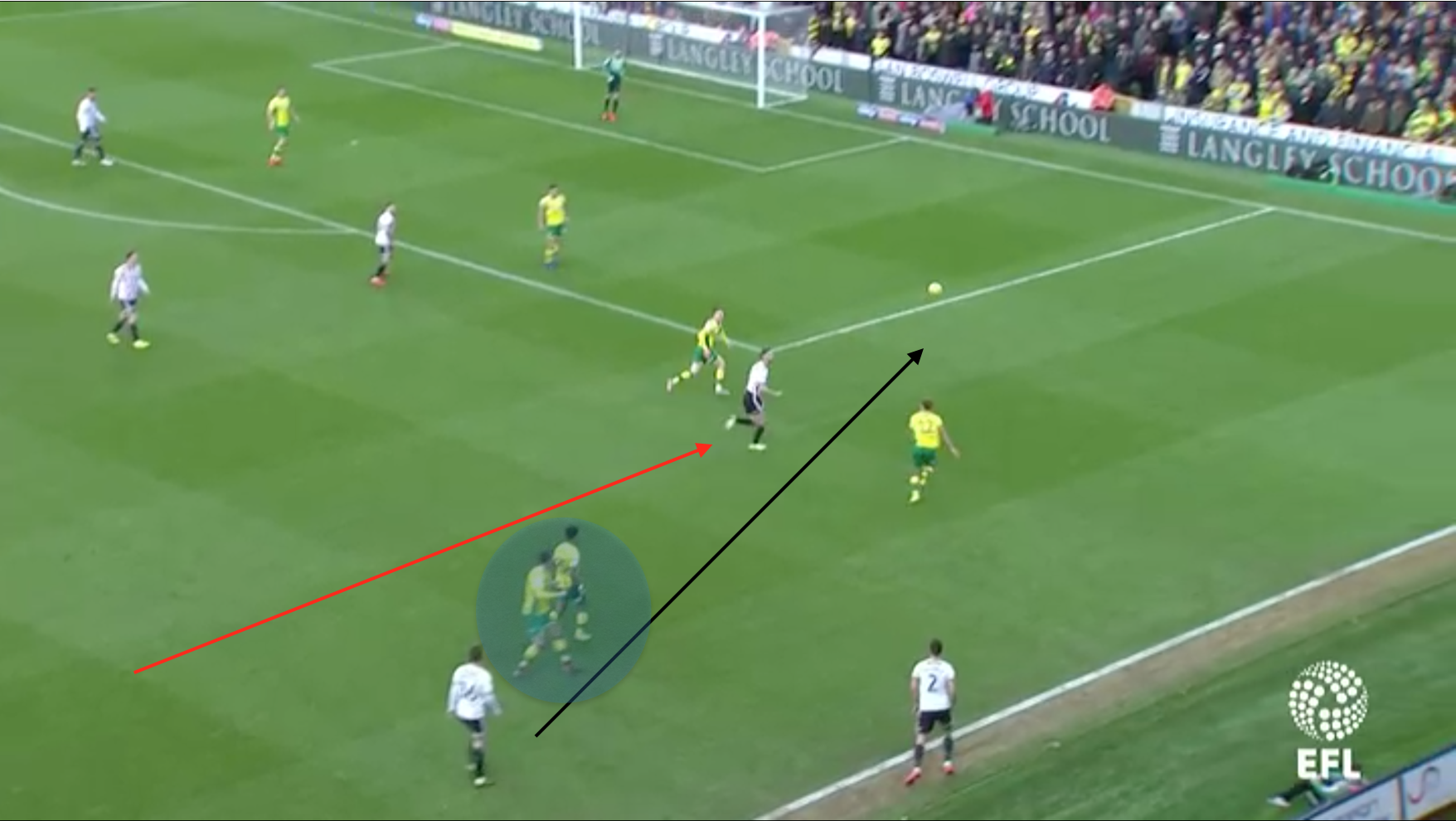 In regards to their designated attacking players, Sheffield United have generally revolved greatly around Mark Duffy in the number 10 position. On Saturday, though, he was rotated out for on-loan Everton midfielder Kieran Dowell. It wasn’t the best of days for the 21-year-old, who was dispossessed three times and had a pass completion rate of just 75%. You would potentially be hoping for a little higher from your team’s technical focal point. Below the shape of United can be seen, with the number 10 position acting as the link between midfield and attack. 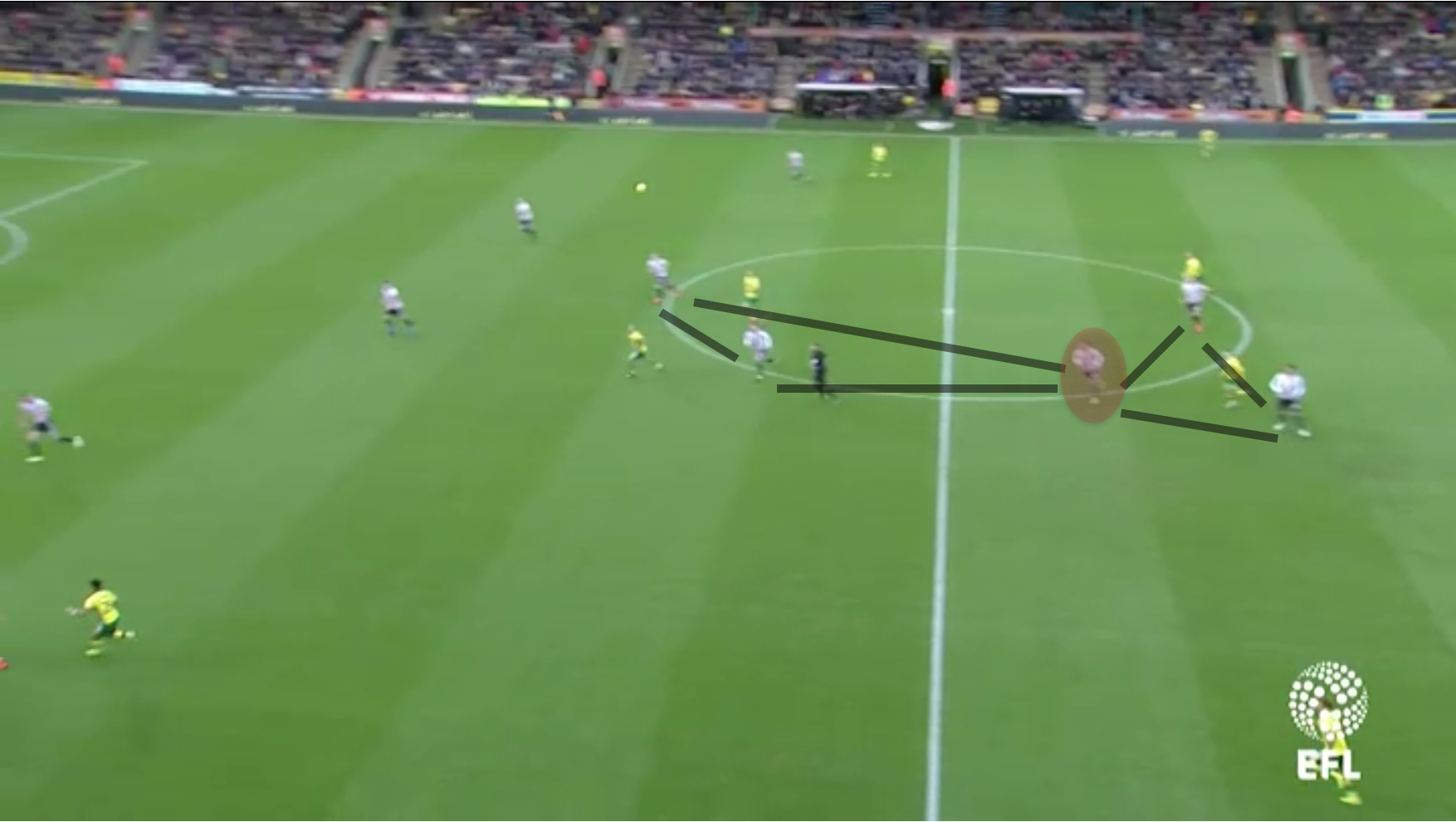 Mark Duffy did end up make an appearance on 60 minutes for the Blades. His impact was most definitely felt, as he grabbed an important assist for Billy Sharp’s second as well as managing a pass completion rate of 84%.

A key feature of Norwich this season has been their possession-based style, given thrust by smart and effective passing. The image below shows how Norwich prefer to start their moves from the back. The centre-backs split and a midfielder drops; a move often seen by sides playing out from the back. 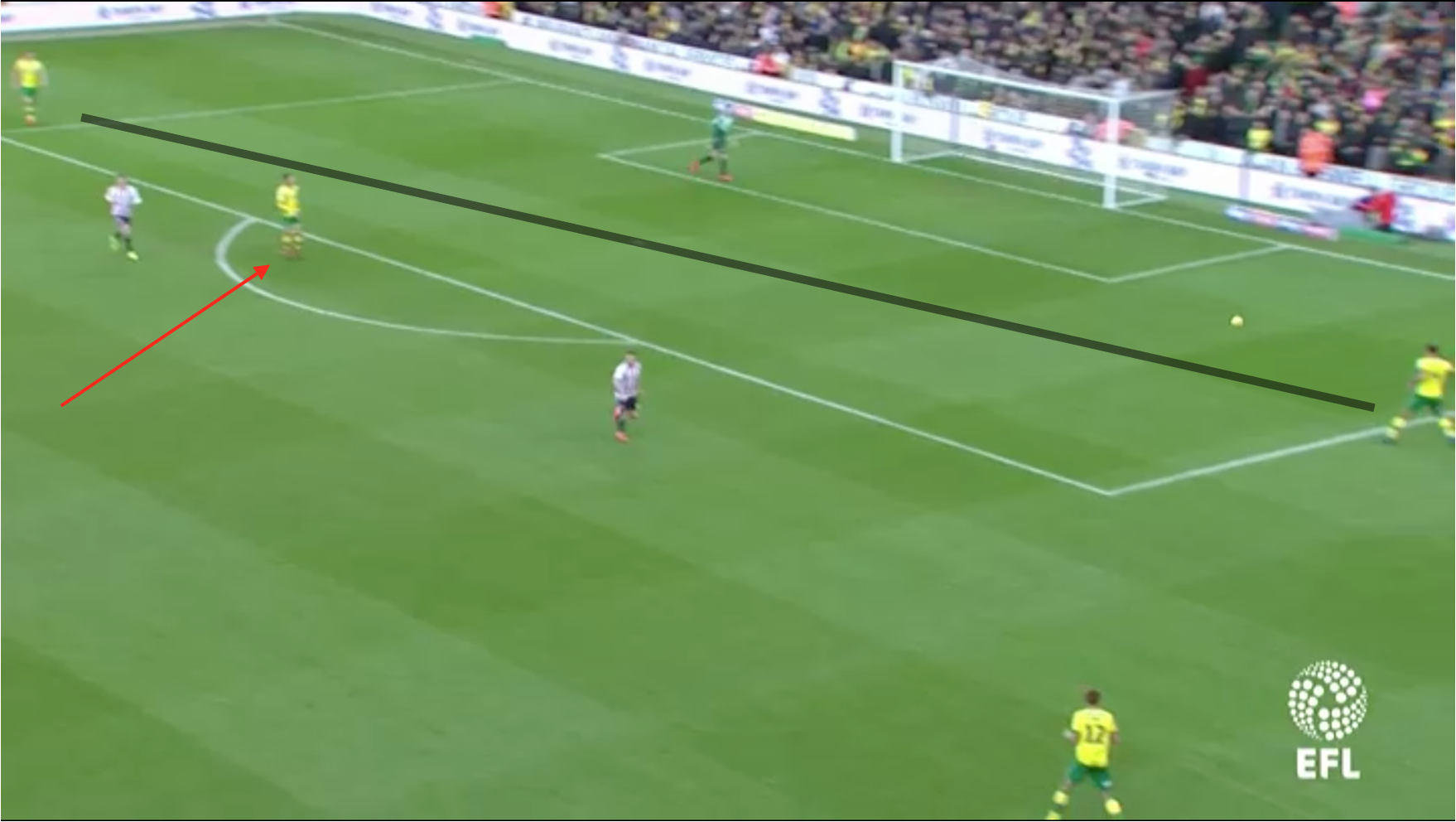 Their style was typified brilliantly by their opening goal, the strike from Onel Hernandez capping off a wonderful 14-pass move. The ball is gathered in midfield and moved back and forth across the pitch in a series of passes, which opens up space for Max Stiepermann. Norwich’s number 10 is then able to drive forward into a position where he can play a one-two with Hernandez, who has tucked in a little from the left wing. 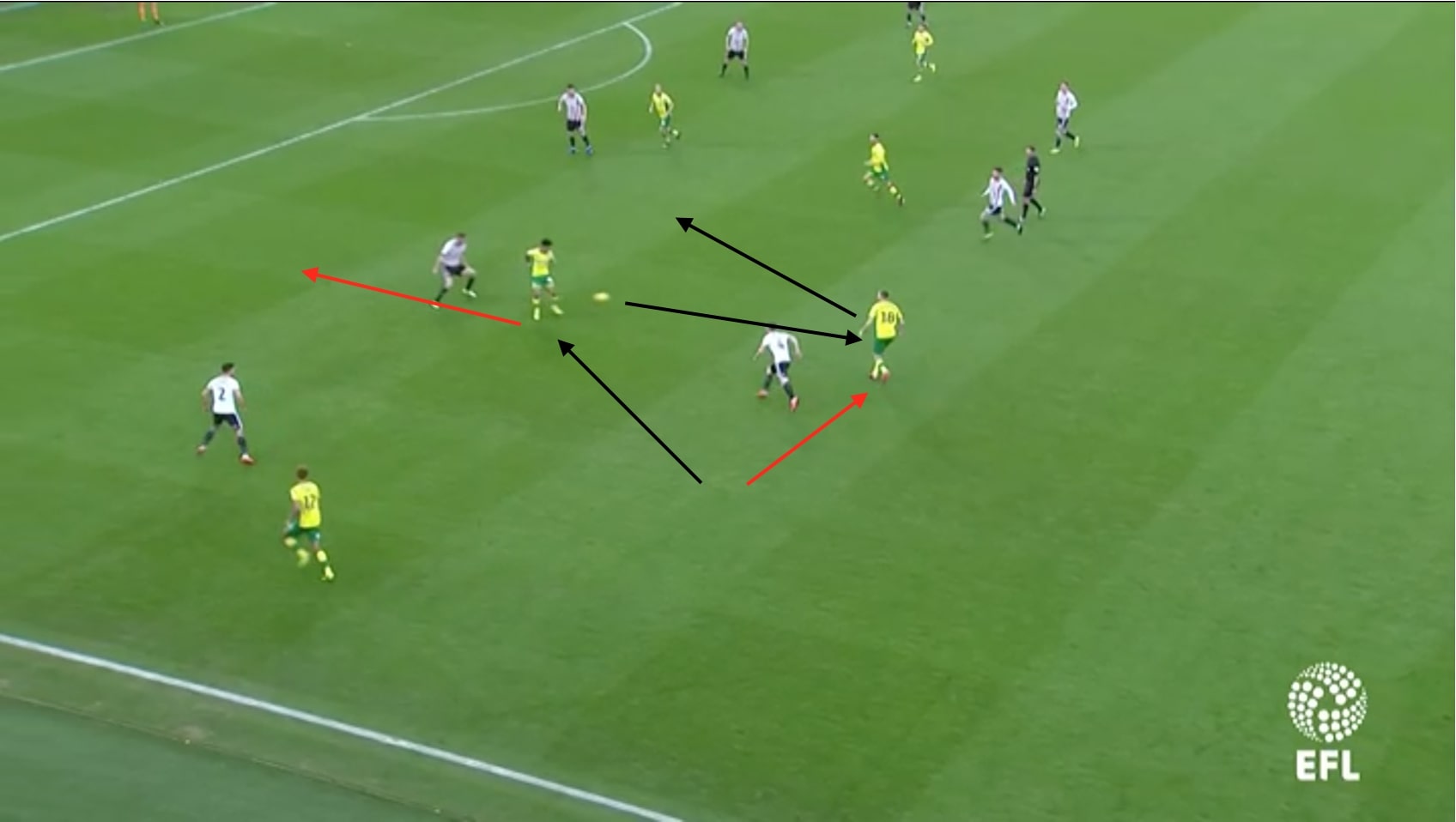 The ball is then worked quickly via Mario Vrancic to Teemu Pukki. The Finnish striker has been deadly in front of goal this season, but in this action operated as a false nine. He drops a little deeper to allow space for Hernandez to run into, then plays him through to score. It’s classic false nine movement brilliantly executed by Pukki and Hernandez. 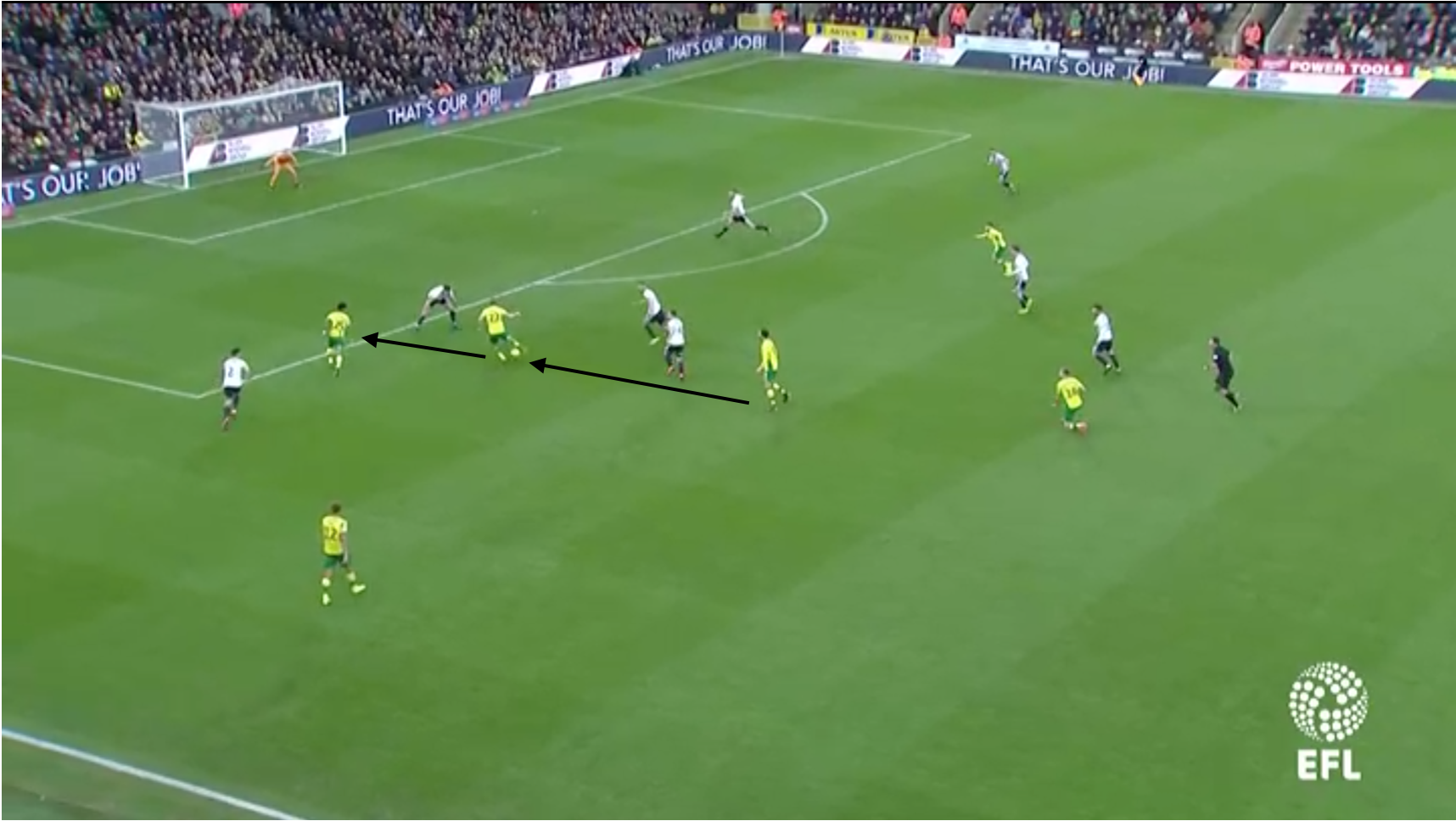 This brilliant attack pulls United around the pitch, opening up space in the final third. This space is then taken advantage of with some excellent quick passing to make the final transition into the box to finish.

A mention does have to be given to Billy Sharp, whose brace took him to 18 goals in the Championship this season. Sharp displays an excellent predatory instinct in the box, and has an incredible knack of getting on the end of crosses, especially when you consider his relatively small size of 5”10′. He has scored six with his head this season, and his second on Saturday displayed this ability excellently.

Mark Duffy manages to work some space on the wing with the assistance of David McGoldrick, who drops out of the area to draw markers away from Duffy. The ex Liverpool youngster then swings in a beautiful out-swinging cross which dips into the space between the centre-back and right-back. 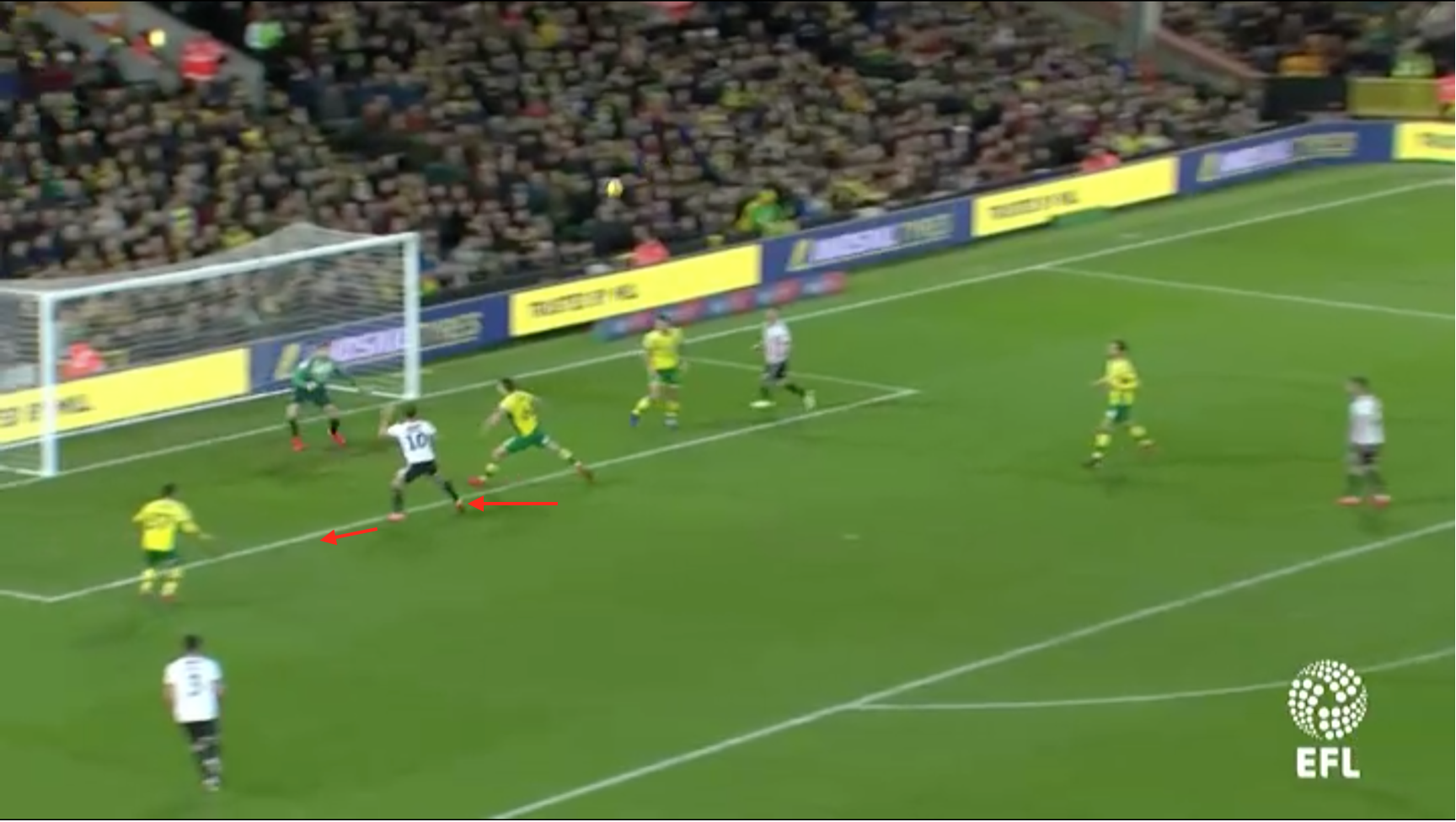 Sharp then displays his instinctive predatory movement as he peels off the back of his marker, having initially made a slight move towards the near post. This movement puts him in a free position at the back post to nod home with the goal at his mercy.

This was an exciting match fought out between two of the division’s best sides. Both have a tactical system and style that characterises them – as many top teams do – which they stuck by in the game.

It could, though, be argued that Sheffield United opted for a slightly more physical approach than usual with the addition of Gary Madine into their starting line up. United made 55 headed passes, as well as 209 aimed into the final third (both significantly higher totals than Norwich), indicating a slightly more direct style of play.

It would be wrong to characterise United’s performance on Saturday by this, though. It was just an extra option for a side that, like Norwich, defaulted mainly to playing the ball on the deck. Both sides will be hoping not to view this match as two points dropped come the end of the season.

Norwich City vs Wigan Athletic Preview: 3 things on the cards according to the stats