After a 2-0 defeat at home to Hull City stopped their seven-game win streak from becoming eight, Leeds United were looking for a swift return to winning ways as they travelled to the City Ground, home of fellow promotion hopefuls Nottingham Forest. Top of the league at the turn of the year is a good omen for Leeds. Each of the last 13 clubs to share that same position have gone on to achieve automatic promotion.

Nottingham Forest are only a couple of wins away from a promotion playoff spot but hadn’t won any of their last five games in the Championship. Beating league leaders Leeds United would be a huge morale boost for the club and an indication of their promotion credentials for this season.

Given the lack of football matches on at the same time, this 1 January fixture had the eyes of the footballing world on it, eager to see an entertaining festive clash between two historic English clubs. They weren’t left disappointed. 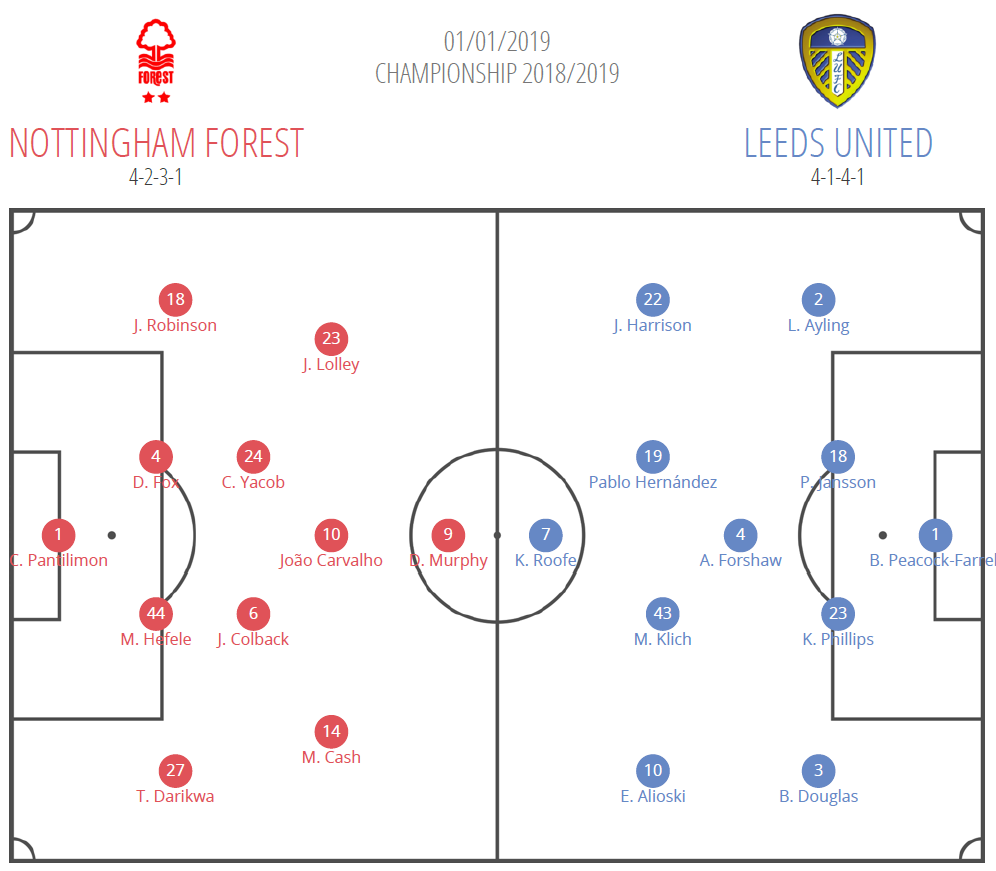 Forest manager Aitor Karanka set his side up to halt Leeds’ passing rhythm and counter attack through the pace of Matty Cash, Joe Lolley and Joao Carvalho. An early injury to centre-back Michael Hefele saw Claudio Yacob move back into the back-four and Adlene Guedioura come on in midfield. Bielsa’s team was set up in their usual 4-1-4-1, although injuries to regular centre-backs saw regular #6 Kalvin Phillips played in the backline.

Forest began the game with an aggressive approach. Aitor Karanka’s side were quite vertical in their passing. They looked to quickly move the ball through Leeds’ defensive lines with forward passes. When Leeds were too compact to play through, Forest often played long and direct to Daryl Murphy who has the physical stature of a true target man. Murphy had the trio of Cash, Carvalho and Lolley in close support behind him. 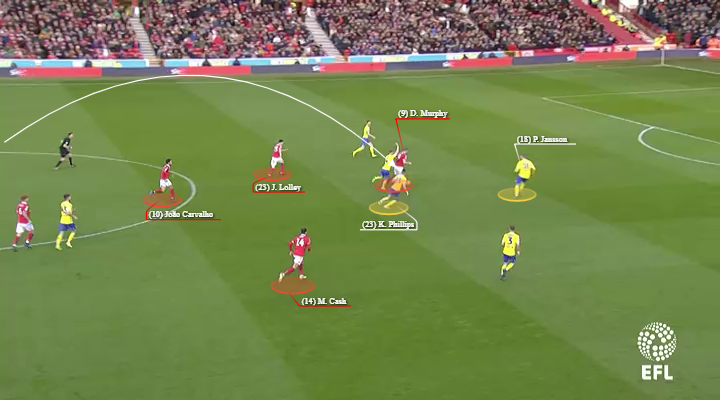 Leeds are a good pressing side and play with a high defensive line. Forest looked to counter this with a direct approach, often letting Murphy fight with one or both centre-backs before being aided in possession by the attacking midfield trio behind him.

Without the ball, Forest looked to shut down Leeds’ attempts to play out from the back by cutting off supply to holding midfielder Adam Forshaw. With short passing lanes cut off and very little time for their defenders on the ball, Leeds found Forest’s high press very difficult to play through. Karanka’s aggressive game plan had Leeds on the back foot in the early minutes. 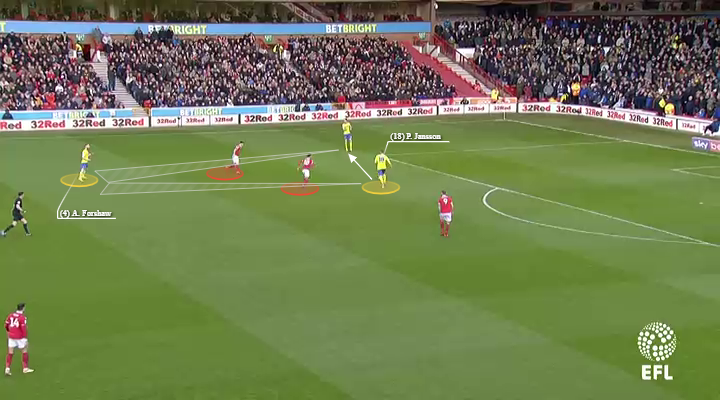 Forest’s three attacking midfielders worked with striker Murphy to cut off Leeds’ attempts at playing from the back through their holding midfielder or wide players. Here, Lolley and Carvalho screen any passes into Adam Forshaw and Leeds are forced to play back to their keeper.

This pressure soon culminated in the game’s opening goal. Following a free-kick for the away side, Forest regained the ball and broke forward with searing pace. João Carvalho drove through the middle of the pitch before playing a long ball over the top of the Leeds defence which was recovered by Adam Forshaw. Jack Colback made a 70-yard dash from the top of his box to the other and pressured Forshaw. The latter’s back pass to his goalkeeper fell short, allowing Colback to round Peacock-Farrel and put Forest 1-0 up in only the 5thminute.

Marcelo Bielsa wants his team to be brave in possession and look to keep the ball when under pressure. The negatives of such an approach were highlighted by this goal but the principle will never change. Keeping the ball is better than launching into safety when under pressure and will ultimately lead to more positives than negatives.

Leeds’ last two wins have come from behind. Bielsa’s side don’t panic when they go a goal or two down, and so it was in this match. Seemingly content to defend their 1-0 lead, Forest withdrew slightly from their initial aggressive approach, holding their medium block and looking to set pressing traps out wide.

However, with their defenders having more time to initiate attacks, Leeds began to control proceedings. Bielsa’s side dominated the ball and looked to advance up the pitch in the wide areas particularly. Interchanges between full-backs, wingers and attacking midfielders were sharp and penetrating, breaking the Forest pressing traps. Third man runs in Forest’s half were causing problems for the home side as Leeds created enough decent chances to go in level at half-time. 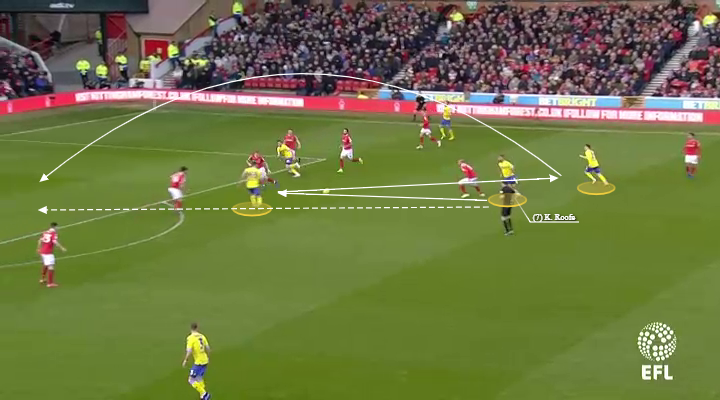 Leeds’ positional play includes a lot of rotation in positions. Above, striker Kemar Roofe has dropped deep to provide a passing option. A midfield teammate, Klich, has taken his place in the #9 position, and a quick pass into Klich and back out to Hernandez gives Roofe the time to make a late run into the box. His run gave Alioski the opportunity to attack the cross but the header flew over the bar.

Bielsa and his team will have also felt quite aggrieved at the break for an incident which saw Leeds winger Jack Harrison, on loan from Manchester City, brought down when through on goal by Forest’s Jack Robinson in the 14thminute. By the laws of the game, it was a definite red card offence but the referee saw fit to only produce a yellow.

The first half ended with Leeds centre-back Kalvin Phillips rightly sent off for a dangerous tackle on Adlène Guedioura. Losing a centre-back is never ideal, especially for Leeds given the current injury crises they have in the position. Even Phillips himself is usually a midfielder. But true to character, instead of creating a make-shift defence and looking to remain solid without the ball, Bielsa had designs on winning the game with 10 men.

The Argentine boss set his side up with one solitary centre-back, Pontus Jansson, to go 1v1 with Forest striker Daryl Murphy. The 3-1-4-1 formation would see Adam Forshaw retain his #6 role, but play a little more defensively to support Jansson.

The Leeds midfield ran tirelessly to compensate for the loss of Phillips and didn’t relinquish their high press, looking to force Forest into long passes up to Murphy. The advanced positioning of Leeds’ attacking midfielders, Klich and Hernández, led to an equaliser for the Yorkshire side through substitute Jack Clarke. 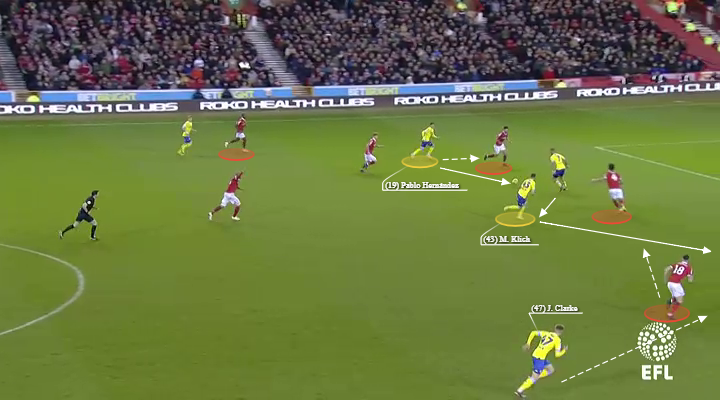 Klich and Hernandez continued in their roles after the red card. They pressed high and attacked the spaces in between the Forest back-line when in possession. Forest’s midfielders were slow to track their forward movements here and with the Forest defence spread thin, Jack Clarke popped up in the box to level it at 1-1.

Incredibly, Leeds kept up the pressure with 10 men and quickly took the lead through Ezgjan Alioski following the breakdown of their own a corner-kick and some awful defending from Forest. Marcelo Bielsa’s side had shocked the home support and showed why they sit top of the table.

It had been yet another comeback from Leeds United and an impressive one at that. Down to 10 men, they continued to dominate possession as they had with 11. But the second goal had come in the 64thminute and there was plenty of football left to be played.

It took no more than six minutes for Forest to draw level, Jack Colback striking again with a shot from the edge of the box following a corner. Leeds’ defending looked ragged, quite possibly fatigued. Another set-piece goal soon followed, Daryl Murphy rising highest to claim a deserved headed goal and put Forest back into the lead.

Leeds’ incredible fightback and admirably daring approach had ultimately backfired. Undone by two set-pieces in the space of a few minutes, the gung-ho approach with 10 men looked to have tired out Bielsa’s team. The Argentine’s footballing principles are famously unshakeable, however. A dogged, sit deep behind the ball and look to counter tactic has no place in Bielsa’s ideology.

Some further fine hold-up play from Daryl Murphy was followed by a pass to substitute Ben Osborn who cut in from the left and unleashed a wonderful strike into the far top corner to seal the deal for the home side. Aitor Karanka’s Forest beat table toppers Leeds 4-2.

It’s never a positive to lose 4-2 to a promotion rival but this game may well be studied by future coaches, analysts and players alike for how Leeds approached the game after going down to 10 men. They say attack is the best form of defence. Leeds took the game to their hosts despite their disadvantage and it very nearly paid off.

Bielsa’s side played the better football at the City Ground. The quick and vertical passing and tireless work rate synonymous with Bielsa’s teams was on display, arguably more so after Phillips was sent off. But fatigue seemed to get the better of Leeds as this busy festive fixture list, unwanted injury problems and a man sent off under 45 minutes seemed to take its toll all at once. A fresh face or two would be welcomed by this Leeds team to push for a very attainable promotion.

Forest’s early game plan worked and they made life hard for Leeds at the beginning. The red card seemed to do Forest more harm than Leeds at first, as complacency looked to have set-in. But Karanka’s men showed the determination, spirit and quality needed to wrestle back the three points they so nearly threw away, vital to their push for promotion.

If you love tactical analysis, then you’ll love the digital magazines from totalfootballanalysis.com– a guaranteed 100+ pages of pure tactical analysis covering topics from the Premier League, Serie A, La Liga, Bundesliga and many, many more. Get your copy of the FIRST of two December issues for just ₤4.99 here, or the SECOND of the December issues with an annual membership right here.

Huddersfield Town vs Nottingham Forest Preview: Shot maps, xG and more – what do the stats say?

Under the microscope: Nottingham Forest – Can they end their 23-year Premier League drought?

Reece James: Can Wigan’s on-loan star make it back at Chelsea?