As usual, January’s congested schedule is getting heavy with some cup rounds occurring in this period. In the FA Cup third round, Sheffield Wednesday from the Championship met Luton, currently second in League One. This tactical analysis will focus on how they ended up with a goalless draw.

When a match ends goalless, there are two main reason. Firstly, both teams had a bad day thus were awful in front of the goal. Or secondly, both teams were good at eliminating the opponent’s strengths. In our case, the second option explains the scoreline, as both Wednesday and Luton struggled to create goalscoring chances.

Besides the struggles, let’s see what chances there were. Looking into the first half you may see the biggest chances came when one team won the ball and counter-attacked the opposition’s unsettled defence. Luton in particular had some promising chances. However, when both sides had to build from deep, they struggled a lot due to the opponent’s pressing scheme. Therefore pressing phases were important factors in this game.

The home side lined up in the usual 4-1-4-1 formation where both wingers drop into the midfield line. However, in possession they move to the first line. Furthermore, when Wednesday had the ball Matias and Boyd usually positioned themselves in the half-spaces, rather than next to the sideline. This was important in this match due to the opponent’s narrow set-up. On the other hand, Luton formed a 4-3-3/4-3-1-2 shape. 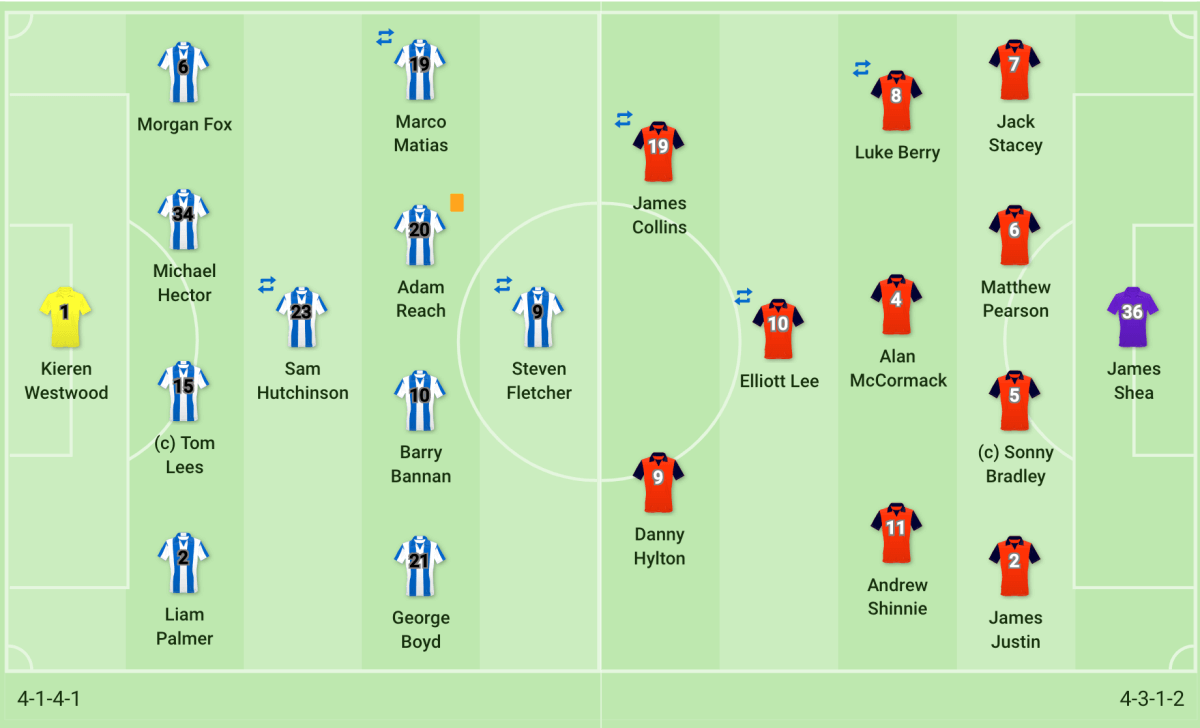 The home side employed a 4-1-4-1 formation without the ball with Hutchinson responsible for covering the space in front of the centre-backs. Also, he tasked with an important marking role which aiming to cover Lee in the #10 space. As a result, only the rest of the midfielders and the forward featured in the pressing phase. 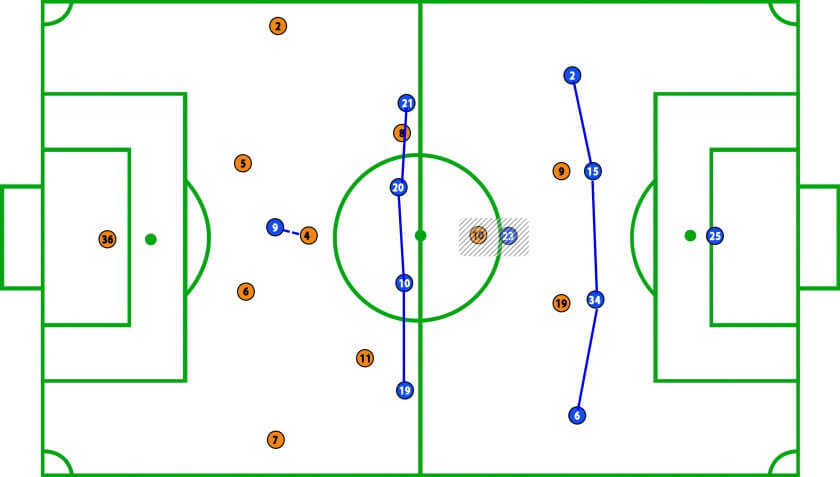 Moreover, Wednesday did not press in really high areas, although the second line positioned in the opponent’s half. Instead of pressing aggressively, they allowed circulation between the opposition centre-backs. Only when the ball moved to the full-backs or the central midfielders asked for possession did the pressing movement start. 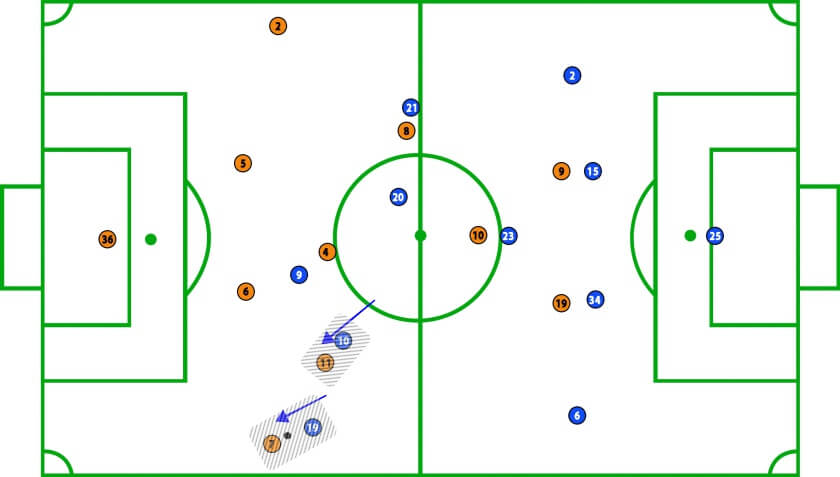 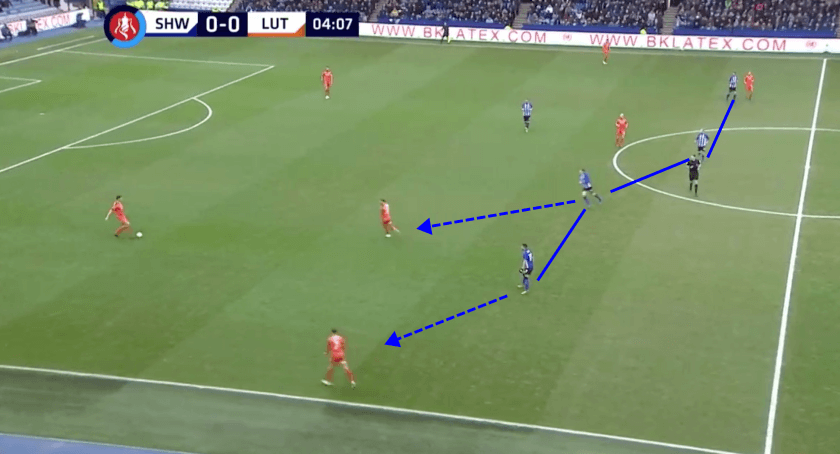 This system often caused trouble for Luton, but interestingly long balls were not the first response to the press. Since the visitors used two forwards up front it would have been a logical choice, but Luton did not take advantage of the set-up.

The visitors used a different approach to disrupt Wednesday’s build-up. However, there were similarities, such as Luton also not pressing high up the pitch. Instead, the aim was to protect the centre, creating the forwards’ duty of blocking the route towards the centre. Elliot Lee meanwhile focused on marking the opposition’s deepest midfielder, Sam Hutchinson. This forced the opponent to wide areas. 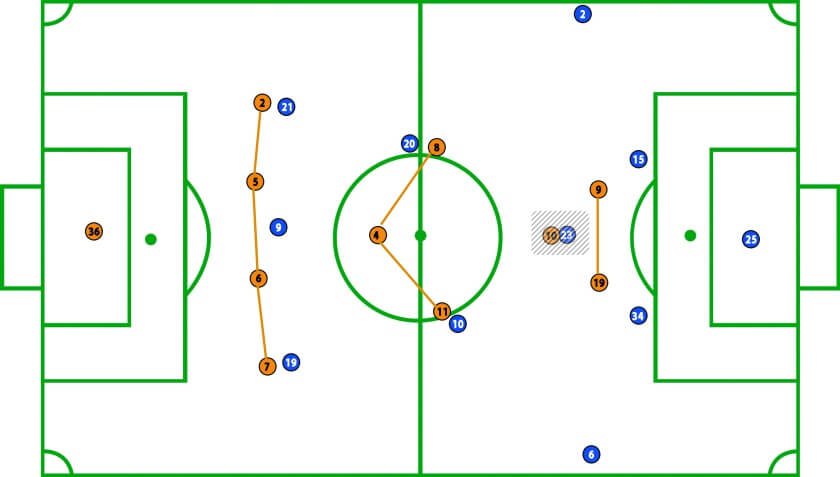 Theoretically, Wednesday had an advantage out wide, and as such should have taken advantage of Luton’s narrower setup. When the ball moved out to the wings however, the visitors were good at closing down the area. They relied on the near-side #8 diagonal press which was immediately triggered. 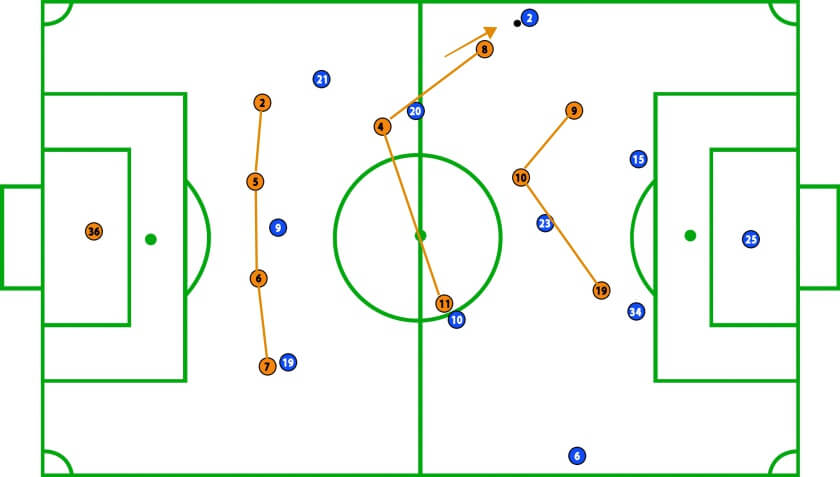 Also, sometimes the near-side forward helped with shifting to the side and pressing. This mainly occurred in the deeper areas though when Luton moved back in their own half.

Therefore, Wednesday were only occassionally able to access to the middle whilst they suffered on the wings. Even when they found an open passing lane, they didn’t take advantage of it due to some errors. Here is an instance where they found the passing lane but Matias failed to control the ball adequately.

Two possible solutions emerged in Wednesday’s game which could have offered an adequate way to penetrate the guests’ defensive structure or get behind their last line. Firstly, there were instances when they dragged the opponent’s fullbacks out of position but there was no follow-up movement which could fill in the space.

In the image above, Matias dropped to the half-space as usual and Stacey followed him but no-one fills the created space. Although Matias tried to penetrate the space after the dropping movement – a great tool against the man-marking’s reactionary style – his teammates didn’t take advantage. They were not targeted with long balls.

As I mentioned earlier, the Wednesday wingers took up narrow positions, which in turn narrowed their opponnents’ last line since the full-backs also stayed narrow in order to mark their wingers. This opened up space out wide for the home side’s full-backs to penetrate the area.

Above, you see above an occasion when this pattern was used. Liam Palmer is on the ball which attracts the opposition full-back. He steps out to close down Palmer, while Boyd aims to penetrate that space. Unfortunately, this occurred just once or twice in this match.

Secondly, when the centre-backs passed the ball to the wings, Luton immediately closed down, thus it was not effective. However, after a switch of play Wednesday were able to use the momentum of the shifting opponent to break through. With the winger and the near-side full-back they created a numerical superiority against Luton’s near-side #8. If exercised with good tempo, this could have been a dangerous tool to break the opponent’s defence. 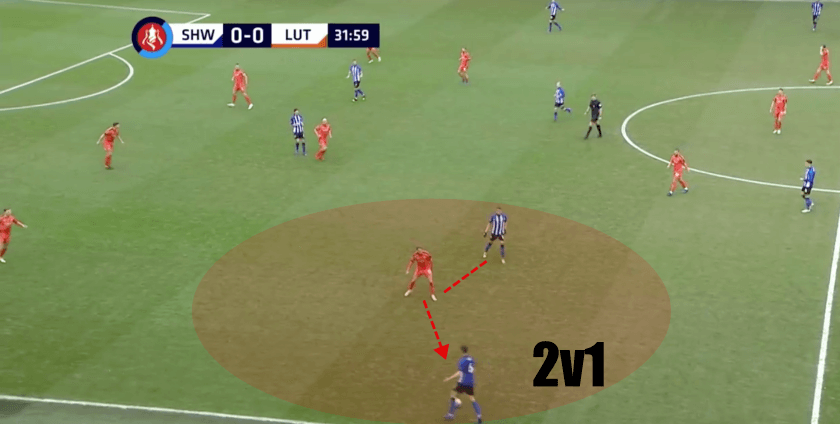 All in all, Luton’s performance was quite good, especially defensively. They reduced the attacking opportunities and tools for Sheffield Wednesday a lot. This strict and organised defence made the draw possible and allowed the battle to continue. On the other hand, Sheffield Wednesday were not in top shape. They have some sustained issues which await former Manchester United legend Steve Bruce to solve when he actually takes over.