The games come thick and fast at the end of the calendar year and this provided both Swansea City and Wigan Athletic an opportunity to get back to winning ways after Boxing Day defeats.

In this Championship tactical analysis, we’ll look in detail at how Wigan Athletic ended a four-match goalless streak as well as Swansea City manager Graham Potter’s mistakes with his team selection and formation choice and how they recovered in the second half.

The Latics took an early lead from the penalty spot after just 10 minutes. The build-up to the spot-kick being awarded summed up Swansea’s first-half performance: disorganised, disjointed and pretty much clueless.

Graham Potter gets it badly wrong with a 3-5-2

Against Wigan, it was one of those back three variations. After another ineffective performance, however, you wonder if Potter will focus more on using a back four for the remainder of the season.

It was brave to adopt wingers Dan James and Wayne Routledge as wing-backs. Potter later took full responsibility of his side’s first-half performance, admitting he got it wrong and how he almost made a substitution before half-time.

We will look in more detail as to why the system simply didn’t work in this tactical analysis. 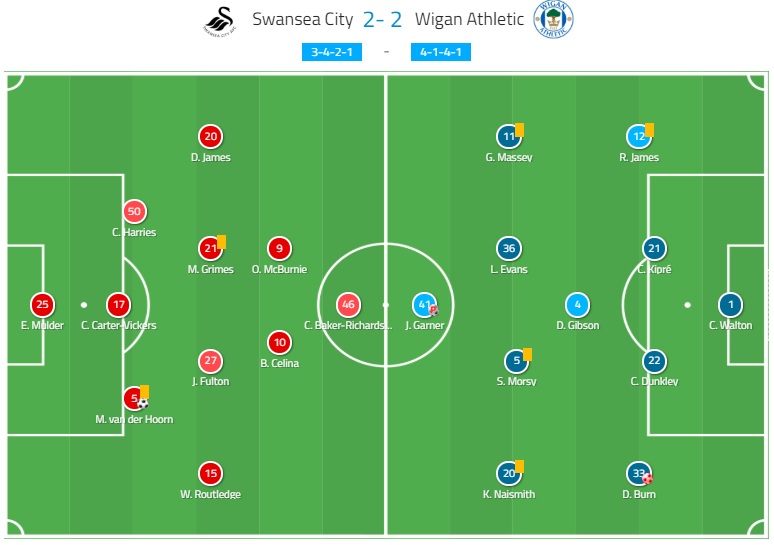 Wigan, meanwhile, adopted a 4-1-4-1 system, the same that Aston Villa used in their narrow 1-0 victory at the Liberty Stadium on Boxing Day.

As Graham Potter expected, Wigan’s 4-1-4-1 defensive shape packed the central areas. The Swansea manager later explained that the use of wing-backs was a ploy to get the ball wide and attack down the wings. 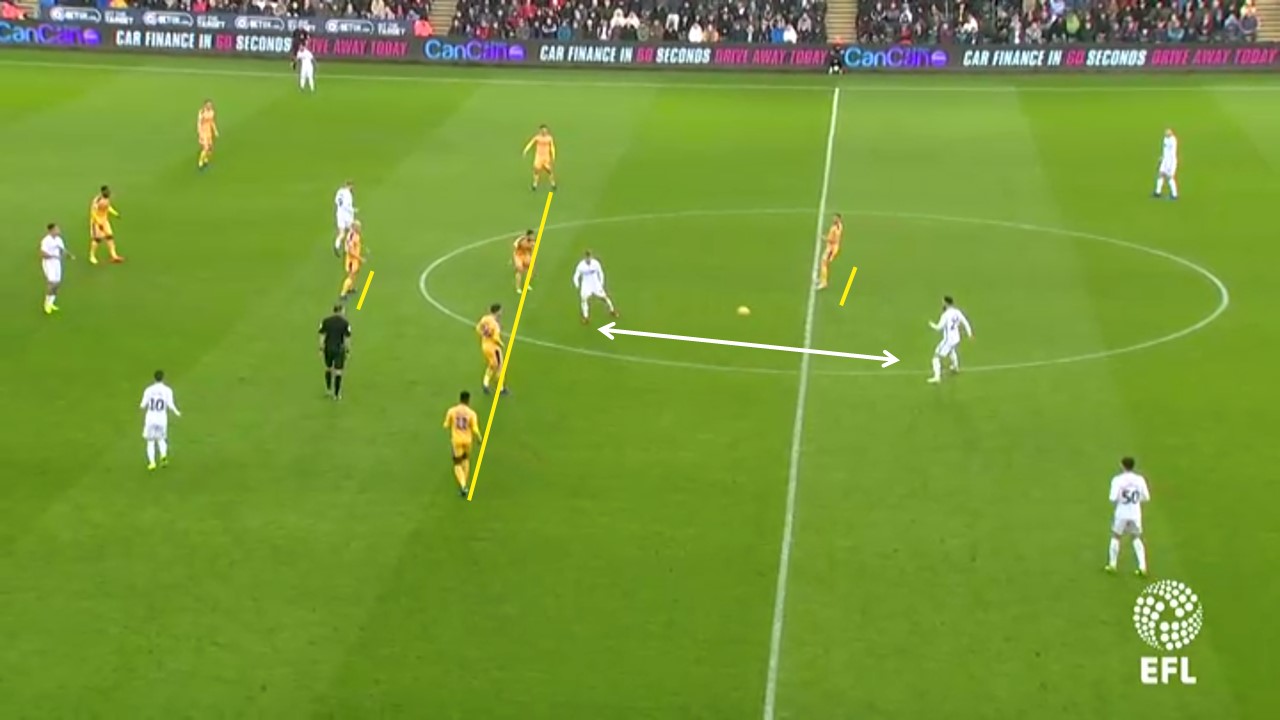 When Swansea looked to attack down the sides, Wigan were also effective at getting across and blocking the passing lanes into the likes of Wayne Routledge and Oli McBurnie.

To combat this, Swansea City looked to play long balls over the top for the wing-backs to chase. When they did manage to get the ball wide in the final third, Wigan again got players across and packed these wide zones.

Wigan Athletic were wise to adopt a high press against Swansea City. This, combined with their ineffective back three system, added to Swansea’s self-inflicted problems early on.

On Boxing Day, Aston Villa allowed Matt Grimes to pull the strings from a holding midfield position and this was something that we picked up in the analysis for that Championship clash.

Wigan must have watched that game and didn’t want to allow the midfielder the same time and space to pick his passes to the wide attackers. 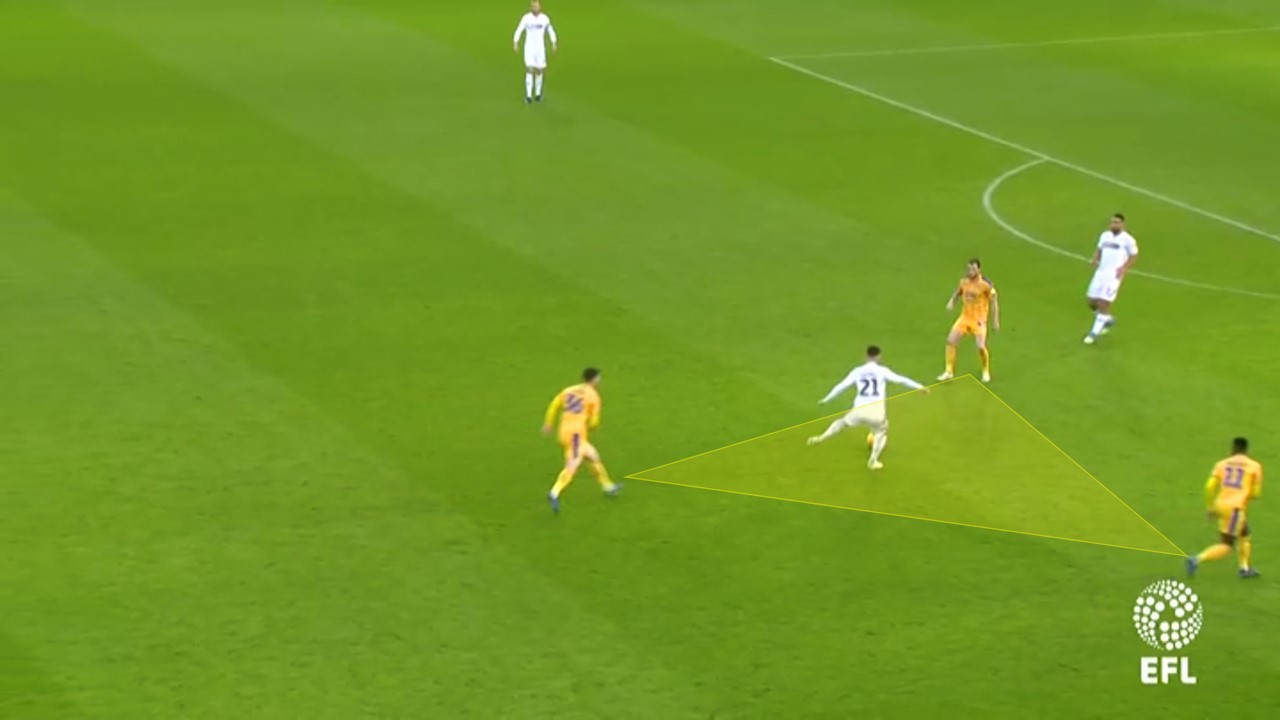 Wigan’s press was effective enough to prevent Swansea from playing out from the back. This often forced the home side to either play long or recycle the ball backwards. With Wigan also looking to play direct, the ball was played back and fore at times like a pinball machine.

Wigan’s battling qualities in an attempt to improve an awful run of results, their high press and Swansea looking void of ideas made it a scrappy affair in the opening 45 minutes.

With Swansea City adopting a 3-5-2 system with the use of attacking wingers as wing-backs, Wigan looked to take advantage of the home side leaving gaps in wide areas.
Swansea City sometimes sat as a back four with Dan James having to rapidly get back in his defensive position on the left near the touchline.

When James was further up the pitch after a loss of possession, Swansea’s left-sided centre-back Cian Harries often had to come across to cover and defend long balls into this targeted area.

On at least two occasions in the first half, Wigan Athletic had two decent goal-scoring chances from simply playing long balls into their right channel. Winning the knockdowns rather easily, Wigan had players to run through the middle to exploit the gaps in Swansea’s defence and get shots on goal.

Swansea City were at sixes and sevens at the back and looked like a team of players who had little idea of what their individual jobs were. This could simply be summed up by Wigan’s opening goal inside the first 10 minutes.

Spurs loanee defender Cameron Carter-Vickers hooked away a ball in the box without any need to do so. The ball was going to easily fall to the goalkeeper but it appears that Erwin Mulder wasn’t vocal enough in making his colleague aware of the situation.

Taking no risks, he hooks it across to the left side of the penalty area. With wing-back Wayne Routledge rushing back in position, he clumsily bundles a player over as they both chase the loose ball. The penalty is awarded and Wigan Athletic lead 1-0.

Like at Hull just over a week ago, Swansea City’s weakness at defending corners was exposed once again. And like at Hull, we saw a preview of what was about to come with two similar corner kicks in very quick succession, the only key difference being that the second one was scored.

Both corners are aimed at Wigan’s Chey Dunkley, with the defender winning both aerial challenges. The first saw his header blocked by the covering Wayne Routledge just in front of the post, but the second header – aimed in the exact same direction – had no Swansea player covering and Wigan doubled their lead.

Swansea City desperately needed to change the system and personnel at the break to give themselves any chance of salvaging a point from this game. In terms of key stats, in the first-half, possession was slightly in Wigan’s favour (51%). So too were shots (3-12), big chances created (0-2) and shots inside the box (3-9).

The second half saw a clear momentum switch, helped by Jefferson Montero’s direct runs down the left and a better balance across the pitch.

Swansea City dominated after the break with 73% possession, had more shots (10-4) and created more big chances (2-0). However, after creating and missing three big chances in their home defeat against Aston Villa, they missed another two big chances against Wigan and it’s an on-going issue that Graham Potter will quickly need to address.

Wigan caused problems for Swansea City in the first half as a result of their commitment to a high press. They dropped back in the second half though and invited the home side into their half of the pitch. This allowed Bersant Celina, who dropped back into a holding role following Matt Grimes’ move to left back, enough time and space on the ball in his own half to pick forward passes.

Wigan continued to pack the central areas, forcing Swansea to attack down the sides in the second phase. On the left, they were mostly hopeful and reliant on Montero’s individual ability to get to the byline and put in crosses for Oli McBurnie and substitute Wilfried Bony.

Graham Potter always wanted his side to have width to stretch the opposition’s defence. If wingers moved inside, which is often what Dan James looked to do – cutting in from the right – he wanted other players to fill that void.

Like Swansea City, Wigan Athletic also showed weakness at defending corners, with both of Swansea’s goals coming from set pieces. The first was an own goal as a Wigan defender looked to clear Matt Grimes’ testing in-swinger from the right. The ball ricochets off Burn’s head and into the net, giving hope to the home side on the hour mark.

For the second goal, Wigan’s man-marking system comes undone. Swansea’s captain Mike van der Hoorn loses his marker – the towering Daniel Burn – to get goal side of him before volleying the ball home from close range.

Wigan Athletic will be disappointed to lose a 2-0 lead. On the flip-side, however, they’ll be encouraged with a point having had a woeful away record. For Swansea City, they’re continuing to leak soft and easily avoidable goals which is an ongoing concern for them. Manager Graham Potter didn’t help the cause with a bold tactical plan that didn’t pay off but they’ll be happy to avoid defeat after a disastrous first-half display.

The EFL Stats: Why are Sheffield United struggling? Who was Huddersfield’s...

Under the microscope: Can Ryan Christie lead AFC Bournemouth back into...

Under the microscope: How has Jorge Grant performed for Peterborough United...