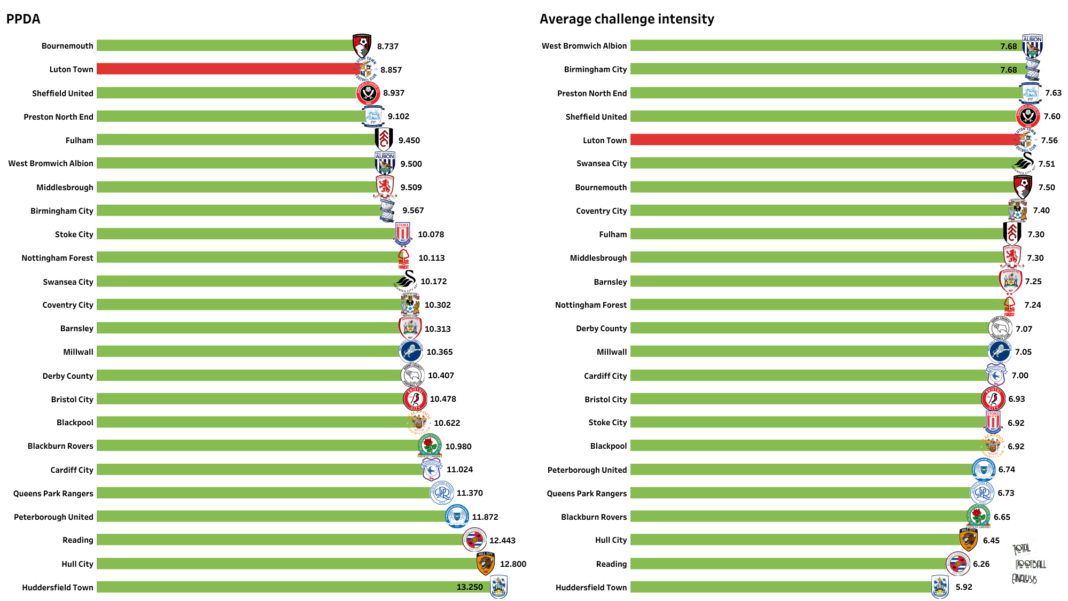 The EFL Championship promotion playoffs are here as Luton Town host Huddersfield Town in the first leg of the semi-final on Friday the 13th of May 2022. The previous meeting between these two teams in the regular season saw Huddersfield Town emerge 2-0 victors at home last month, with goals from Jonathan Russell and Mouhamadou-Naby Sarr. Coming into this fixture, Luton won 1-0 against Reading, and Huddersfield won 2-0 against Bristol City. Luton Town come into this clash after winning 1-0 against Reading, thus confirming their spot in the promotion playoffs. Harry Cornick scored the Hatters’ only goal in the stoppage time of the first half. Luton ended the regular season with a record of 21 wins, 12 draws and 13 losses and a goal difference of +8, which is the lowest of any team in the top six. One of Luton’s strengths has been the intensity of the press as they have 8.857 passes per defensive action (PPDA), which is second only to Bournemouth. Above is the shot map of Luton Town in this season’s EFL Championship. Their top two goalscorers are Elijah Adebayo and Harry Cornick, with 16 and 14 goals to their names, respectively. Overall, the Hatters have scored 59 goals (excluding own goals netted by opposition players) from 480 shots, thus giving them a conversion rate of 8.14 shots per goal scored. Right-back James Bree is Luton Town’s most successful threat creator this season in the EFL Championship from both open play as well as from set-pieces. Most of the Hatters’ threat comes from the right flank as a result of him. But Bree is only the second-most assist maker for Luton this season. Instead, it is Kal Naismith who has provided the most assists for the Hatters, with seven to his name. Huddersfield Town ended their regular season with a 2-0 win at home over Bristol City, where the goals were scored by Harry Toffolo and Danny Ward. The Terriers’ record at the end of the regular season stands at 23 wins, 13 draws and 10 losses, with a goal difference of +17. Huddersfield have scored more goals than what xG estimated. The metric predicted the Terriers to score 57 goals, but they have overperformed by netting 64 times. Seen in the above visual are the attacking performances of Huddersfield Town in this EFL Championship season. Despite ranking in the middle for xG, the Terriers have finished the season with the fifth-highest number of goals scored of any team. Huddersfield also rank in the top six for ‘percentage of shots on target’ and ‘successful dribble percentage’.

The EFL Championship playoffs are usually the most exciting part of the EFL season. Both teams will be looking to make it to Wembley for the final, but only one can progress.

Under the microscope: Bournemouth – Where do they need to strengthen for the next season?

Under the microscope: Fulham – What do they need to do to survive in the top flight next season?

Under the microscope: Bournemouth – Where do they need to strengthen for the next season?

Under the microscope: Fulham – What do they need to do to survive in the top flight next season?