Norwich City continued their fine Championship form with a 3-1 victory over Hull City. The victory on Wednesday night makes it 5 wins in 5 for the Canaries. Norwich remain at the top of the Championship table despite victories for both Sheffield United and Leeds.

Hull have contrasting fortunes. The Tigers sit 13th in the league and while a lat push for the playoffs isn’t totally out of the question, it does seem unlikely.

In this tactical analysis, we take a look at this midweek clash between two former Premier League sides. How were Norwich able to easily dispatch with Hull? And why were Hull unable to take anything from their trip down the east coast? 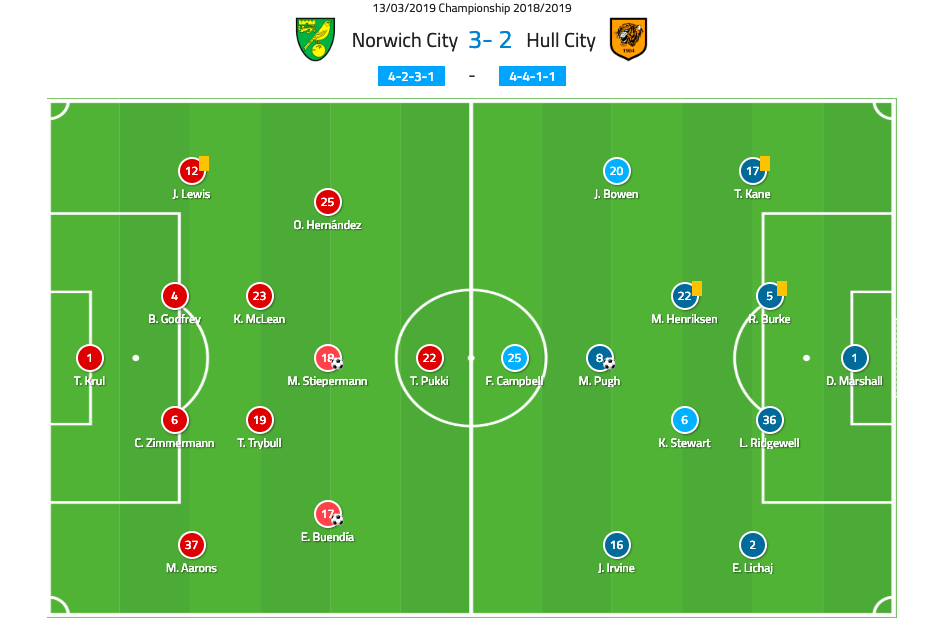 Daniel Farke set his side up in a 4-2-3-1. Norwich tend to play with a fluid front three/four. Their attack is supplemented by midfield runs from Marco Stiepermann, Tom Trybull and Kenny McLean. Max Aarons and Jamal Lewis hold their width, offering overlapping runs outside Onel Hernández and Emiliano Buendia.

Hull, on the other hand, lined up in a 4-4-1-1 which often resembled a 4-4-2. Frazier Campbell led the line with Marc Pugh often in close proximity.

What will late venue change mean for RB Leipzig and Liverpool?