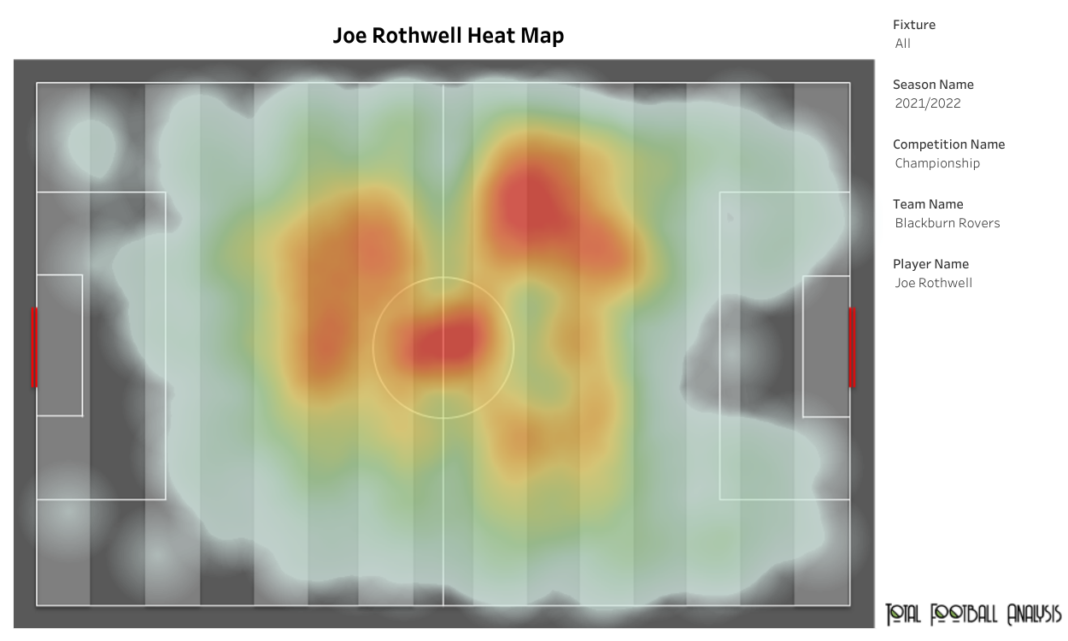 Blackburn Rovers have had a far better campaign this season in the EFL Championship than the last one, finishing eighth on the points table. While Ben Brereton Diaz’s goals have certainly helped, one man who has flown under the radar somewhat has been midfielder Joe Rothwell. The 26-year-old has had a productive campaign for the Rovers in the Championship. However, his contract is expiring on 30th June 2022, and the Lancashire club has confirmed that the Englishman will leave at the end of the contract. In this article, we will analyse Rothwell’s season at Ewood Park and suggest which team would benefit from his services. Shown above is the heat map of Rothwell for Blackburn Rovers this season in the EFL Championship. Being a central midfielder, it is no surprise to see Rothwell being influential in the middle of the park. For Blackburn Rovers this season, Rothwell has attempted 32 shots, 141 crosses, completed 48 interceptions and won 26 tackles. Nine of the 32 attempted shots ended up being on target. He has also completed 1.7 key passes per game and 1.3 dribbles per game. Seen in the above visual are the pass sonar, xT map and xT timeline of  Rothwell for Blackburn Rovers in the 2021-22 EFL Championship. Rothwell has been a threat in the final third on a regular basis, be it through the middle, left flank or right flank. The Englishman has regularly produced an xT score of 1.0 or more. At times, he has even surpassed 2.0. The pass sonar shows that his sideways passes (into the opposition’s penalty area) have generated a significant threat.

Joe Rothwell will leave Blackburn Rovers on 30th June 2022 after being at the club for four years, having joined from Oxford United. He has been linked to joining several championship clubs, including West Bromwich Albion and the recently relegated from the Premier League Norwich City. However, the team that may benefit from Rothwell’s services the most could be Scottish giants, Rangers. He could be an ideal player to complement James Tavernier or be his backup.