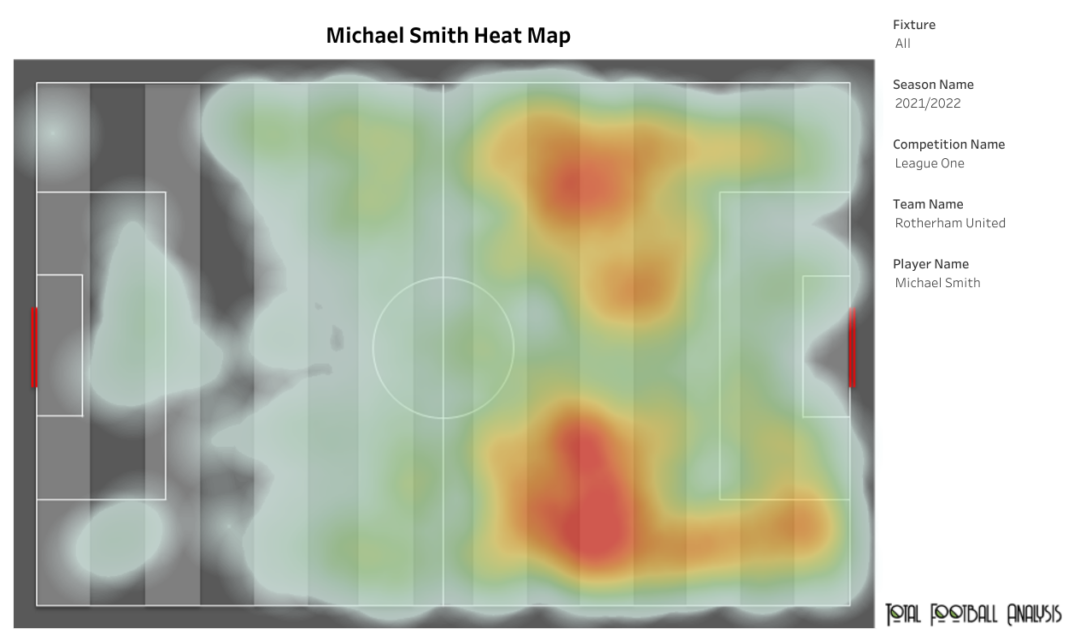 Rotherham United earned automatic promotion to the EFL Championship for the 2022-23 season on the last matchday of the 2021-22 EFL League One season. The Millers finished on 90 points, which was just one point ahead of MK Dons who had to settle for the play-off spots. One of the keys to Rotherham United’s successful promotion campaign was the striker, Michael Smith. The forward ended the campaign as his team’s top goalscorer. In this article, we will dissect the performances of the Englishman this season for the club based in South Yorkshire. Smith featured for Rotherham United in 45 out of the 46 games this season, playing for 3,997 minutes. In those 45 matches, Smith scored 19 goals and not even a single one came from the penalty spot. All but one of his 19 strikes came from inside the opposition’s penalty area. The Englishman attempted 144 shots and mustered 50 of them on target, arriving at a shot accuracy of 34.7% for the campaign. His conversion rate came to 7.58 shots per goal scored. Throughout the season, Rotherham United actually underperformed by some distance in front of goal, according to the xG (xG of 82 compared to 70 goals scored). Seen in the above visual is the heat map of Smith in the recently concluded EFL League One season. He was influential for the Millers on both the flanks in the attacking third but slightly more so on the right wing. The 29-year-old completed 61 crosses. He also completed several progressive passes, passes into the final third and passes into the penalty area. He showed that he can cut in from both the wings. Rotherham United have made an immediate return to the EFL Championship for next season thanks due, in no small part, to Michael Smith’s performances this season. However, they have been a yo-yo club between the Championship and League One, alternating every year between these two leagues since the 2016-17 season. The Englishman must now show that he can perform in the second tier of the English Football League system.